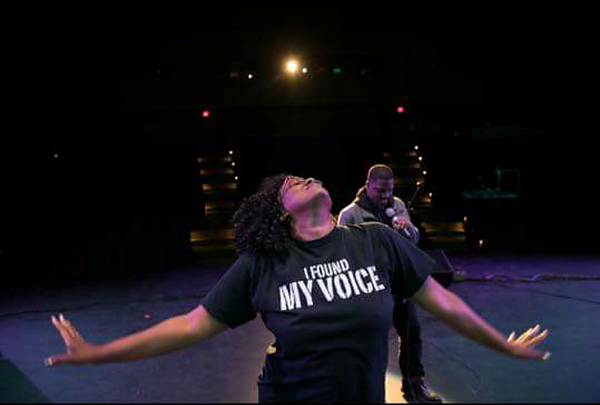 Turning pain into a passion for performance has been therapeutic for Cherisse Bradley.

A gifted entertainer since childhood, she has used her love of the stage to help heal herself and others. For the fifth consecutive year, she will host “I Found My Voice,” a live concert recognizing those who have experienced sexual and domestic abuse in Flint and elsewhere. The show will be held at 7 p.m. Sept. 28 at the Capitol Theatre.

Bradley is the founder of I Found My Voice, which provides support for women like her, who travel an ongoing path toward overcoming mental and emotional trauma.

“The concert is a tribute to women, honoring survivors of domestic and sexual violence,” she says.

The relocation of “I Found My Voice” to the Capitol Theatre from its previous venue at the University of Michigan-Flint represents Bradley’s goal to increase the show’s exposure.

“I’m hoping to double my attendance,” she says.

Featuring musical tributes to Aretha Franklin, Tina Turner, Mary J. Blige and Billie Holiday, “I Found My Voice’s” theme will be inspirational. Bradley, whose father Bruce Bradley founded Flint’s Tapology performance troupe, used drama and dance for her own inspiration after suffering from sexual abuse from ages 9 to 15.

“I come from an artistic background. My whole family performs,” she says. “So when I was going through trauma I was also introduced to the performing arts.”

Bradley appeared in productions at the McCree Theatre and eventually began traveling in performance competitions, later relocating to California to attend school with a dance scholarship. She also lived in New York where she worked as a dancer and singer.

About five years ago she returned to Flint after struggling through what she calls “unhealthy relationships” and other challenges related to the lingering hurt of sexual abuse.

“I missed a lot of opportunities to make a living as a professional artist,” she says. 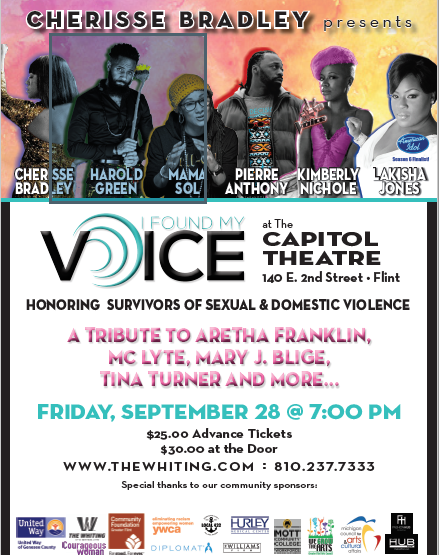 As Bradley was “regrouping” in Michigan and saving money, she got the idea to form I Found My Voice, which she says is “centered around healing through entertainment or ‘edutainment’ (education and entertainment).”

The vision for I Found My Voice took the form of a workshop in which Bradley incorporates her knowledge of the performing arts with outreach to women at locations like the YWCA, Local 432 union hall, and Flint Odyssey House. About 25 women participated in the I Found My Voice workshop this year. Some of the them will be featured in the Sept. 28 show and all receive free admission to the event.

“It’s been great,” Bradley says. “It’s been a process with me inspiring them and them inspiring me.

“The reason I wanted to educate people around this issue – art for social justice and change – is that it enables a deeper healing for myself and allows me to help other women.”

Along with live singing and dance, multimedia presentations are part of the “I Found My Voice” concert, which addresses topics like substance abuse and other habits survivors of violation, including Bradley, have experienced.

“I chose to do it that way because sometimes messages about sexual assault, alcohol abuse, all those types of things, can get diluted,” she says. “At the same time, they can make people uncomfortable, but if you present them in a certain way, you’re able to get the message out and heal people at the same time.”

By incorporating the works of male artists like Green and Anthony, “I Found My Voice” attempts to balance the theme of overcoming pain by showing “what it looks like to love correctly,” she adds.

Bradley says her own performance in the concert is revealing and personal.

“I talk about those early years and those shocking things that happened,” she says. “It’s shocking to other people, but it was a very long time ago.”