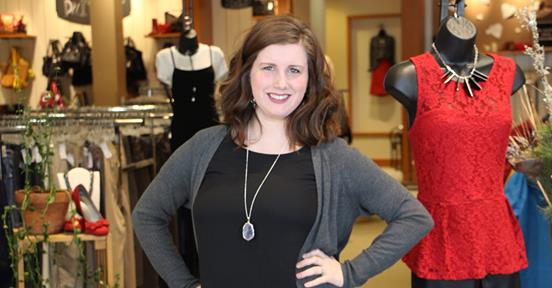 Being creative is important to Amanda Szumowicz.

It’s a necessity in her position as the owner of a retail store where clothing, jewelry and shoes often need coordination for customer appeal.

While been home-schooled, Szumowicz worked at the Wears Like New consignment boutique, 4362 Miller Road, for some time. After 13 years, she became owner of the store in July 2017.

“I realized in a small business I could use my creativity and I really love working with customers and the public. So it’s been cool to see,” says Szumowicz. “I didn’t know I had a passion for retail, clothing or fashion, but it kind of snuck up on me as I started working.”

Small business like Wears Like New and creativity like Szumowicz shows in her store are reason’s Flint’s fashion business is on a roll and keep on growing.  It is one of more than 75 businesses involved in a broad scope of fashion-based activities from design, manufacturing, distribution and sales, according to an audit by TheHUB Flint.

Consignment differs from standard retail and thrift stores in that the seller brings in gently used items that fit current clothing styles to be sold at the business. The item is on the sale floor for 60 days. Once it is sold the seller will receive 40 percent of the sale.

Within the Flint area, Szumowicz says there are probably up to five consignment stores. Despite the presence of other stores like hers in the community, she says the difference at her shop is greater stimulation. From the scent of the store to the mannequin displays, all five senses are activated when customers enter Wears Like New.

r“We want you to walk in and be pleased with what you see,” she says. “I also want to utilize your sense of smell. I want it to be a pleasant experience (so you see) we don’t do things halfway, that we do things fully and well.”

Wears Like New employs five other people, including a store manager, two key-holders, who close the shop at night, and two associates.

Though more of the customers are women, Szumowicz says the store is designed to serve all genders. There are also plus sizes and children’s clothes

General Manager Holly Wright has been working at Wears Like New since 2013 and was promoted to manager within the last year. She says the best thing about working there is a lot like Szumowicz’s favorite reason – creative freedom.

“Amanda is great at letting me be creative, and just working at a small business is like a community,” she says. “You’re like a family. We’re all here for each of us.”

Top picture courtesy of Flint & Genesee Chamber of Commerce. Other pictures courtesy of Wears Like New.