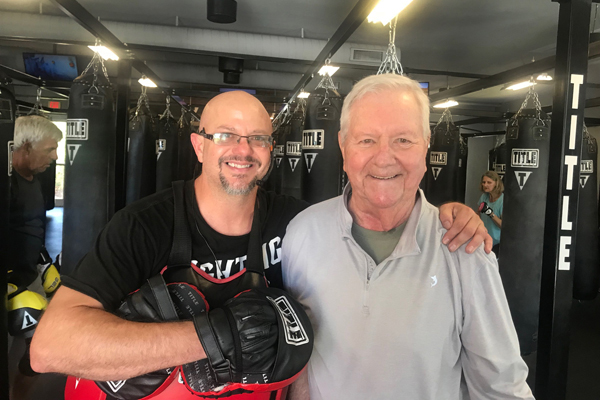 Each year approximately 60,000 Americans are diagnosed with Parkinson’s Disease. Parkinson’s is a neurodegenerative disorder affecting the brain’s ability to control movement.

My dad Norman Berg, is among the patients. He was healthy well into his 80’s and then suddenly, he was not.

Most people are diagnosed with the condition are around age 60, although it does occur much earlier, with actor Michael J. Fox being a high-profile example. In Michigan alone, there are more than 25,000 cases.

As my father’s condition has progressed, two things dominate his everyday life: muscular stiffness and tremors.

The tremors are the most visible and they make simple tasks like eating, drinking and getting dressed extremely difficult. It’s a hard progression to watch someone once strong and able-bodied lose the kind of physical capability we all take for granted. As my Dad’s physical stability becomes more fragile, falling is an ever-present fear and something we guard against, particularly in new environments.

Straws have become a staple at the family dinner table and make drinking liquids a lot easier. Eating out is less frequent. When we do get out, our family favors busy, local establishments with wide-open spaces and lots of activity. This helps minimize falling hazards and the inevitable stares from those not familiar with Dad’s condition.

“Although symptoms can vary from person to person, it’s often characterized by visible tremors and stiffness,” says Kipa. “Due to its unpredictable nature, it’s imperative to understand the signs and risks associated with the illness.”

For my father, it’s difficult to walk. He struggles to maintain balance, even with a cane. But he stays active by doing the things he can and recently took up boxing at a local Parkinson’s resource center. Soon he’ll start doing “voice aerobics,” which help maintain, and in some cases, strengthen weakened vocal cords.

Like many Parkinson’s patients, he has hallucinations, which is a frequent side effect of his medication. The hallucinations can be scary for both him and us.

I’ve developed a lot of empathy for those with Parkinson’s Disease, many of whom have cases far more advanced than my father’s. There’s hope ahead, including new drugs that may slow the progression of the condition, and improved drug delivery systems that minimize common side effects.

As my father’s condition progresses, my mother has taken on a lot of the day-to-day responsibilities Dad used to handle. Her selfless support helps serve as a reminder that the condition has a ripple effect, and that caregivers need recognition, too.

Meanwhile, the one thing that remains constant in our family is hope. Finding the right medications and support groups has helped improve Dad’s everyday life from barely mediocre to nearly miraculous.

He even heads out to walk, using his new “walking sticks.” This is a vast improvement from being confined to his armchair just months ago. Suddenly my Dad has found new stability in his life with Parkinson’s. And for that we are grateful.

Risk Factors of Parkinson’s Disease
Parkinson’s targets the area of the brain that produces dopamine — a chemical that helps regulate movement by carrying messages between the brain and the rest of the body. Medical professionals are unsure of its exact cause, but multiple factors can lead to Parkinson’s development. Among them are traits listed below.

Age: The risk for Parkinson’s increases significantly with age. Older adults, 60 and above, have a much higher chance of developing the disease. Only an estimated four percent are diagnosed before age 50.

Family history: Approximately 15 percent of Parkinson’s patients have a family history linked to the disease. This specifically refers to close relatives, such as a parent or sibling. It’s important to note that individuals can still develop Parkinson’s with or without a familial connection.

Gender: Parkinson’s can affect anyone, but males have a greater risk of being diagnosed. One study found the disease to be 1.5 times more frequent in men than their female counterparts.

Head trauma: Research suggests traumatic brain injuries of any kind might heighten the risk of Parkinson’s. One study found that individuals with mild head trauma had a 56 percent increase in risk, while those with moderate to severe trauma experienced an 83 percent increase.

The best way to identify Parkinson’s is by listening to the body. No matter how minor, it’s critical to acknowledge signs that might be indicative of a more serious problem.

Constipation: Constipation can be an early sign of impaired muscle movement. Parkinson’s forces the bowel muscles to become slow, weak and rigid, delaying the digestive process.

Dizziness or fainting: Dizziness is one of the most overlooked signs of Parkinson’s. It’s caused by low blood pressure and, in extreme cases, can lead to a temporary loss of consciousness.

Problems moving and/or walking: Sharp pain or stiffness in the shoulders, hips, and feet can signify an impending mobility issue. Some might also struggle with walking and maintaining balance.

Sleeping problems: Individuals may experience sudden or uncontrollable movements such as jerking or cramping while sleeping. Other signs could include vivid dreams, talking or yelling while asleep.

Loss of smell: A diminished sense of smell is generally caused by a temporary illness like a cold or flu. But it’s also a non-motor symptom that appears in most Parkinson’s patients. It’s an early sign that can manifest years before an official diagnosis.

Tremors: A rhythmic tremor in the hands or chin is often associated with Parkinson’s Disease. It mostly occurs during rest and is less prevalent when muscles are engaged. During the early stages, it might only impact one side of the body but will spread as the disease progresses.

Vocal changes: Individuals with Parkinson’s might notice distinct changes in their vocal tone. The voice can become lower, softer, more breathy or even hoarse.

For additional Parkinson’s related support in the Sarasota area call 941-893-4188 or visit the Parkinson’s Place website.