There’s a back story behind every entrepreneur, particularly in Flint, the birthplace of a new creative class that is showing that there is more underneath the hood of the city than its automotive culture.

Two of its serial entrepreneurs — Beats X Beers Founder Brandon Corder and Eight One Zero Founder James Thigpen, Jr.— recently got together to discuss their personal journeys and the importance of the city’s  ecosystem on an Instagram Live event that participants deemed an  “Instasuccess.”

Their personal journeys? Well, there were more than a few bumps along the way, according to the hosts.

Sharing them is important, according to Corder, who noted that now, more than ever, is the right time to have a frank dialogue about entrepreneurialism, the importance of supporting Flint’s black businesses, and resilience.

Although the COVID-19 pandemic has wreaked havoc on entrepreneurs, they will survive and come through it stronger, according to the hosts who note “resilience is a part of Flint’s DNA.”

“Our resilience is our strength,” says Corder.

“When you add collaboration to the mix, that’s what will pull entrepreneurs through this COVID recovery, according to the hosts who hope to spur more of it among Flint’s black entrepreneurs by sharing their own story.

“We’ve had a hell of a journey with lots of ups and downs,” says Corder. “A lot of people don’t know how spiritually intertwined we are.”

Both believe in the power of collaboration and began partnering about a decade ago through UM-Flint’s supported incubator space, which helped foster their synergistic relationship.

“We did not know each other at the time,” says Thigpen, who had an office in the space that attracted more than 30 business-minded black residents, who looked to one another for support and inspiration as they struggled to move their respective business concepts from the idea stage to actualization.

The atmosphere was amazing, according to Thigpen.

“We had people that looked like us that were determined to go places,” he says. “Together, we developed a real vibe. With so many creative people all in one place, ideas are going to come up.”

What made the culture unique, according to Thigpen, was its common theme: Destiny.

“It’s powerful when someone grows with you along your journey,” says Corder, who noted that his collaboration with Thigpen was ordained and predestined to be a success.

“We bounced ideas off each other,” says Corder. “That kind of shared knowledge is exponentially powerful. I wouldn’t have made the leap into my own business ventures without that kind of environment.”

Operating an entrepreneurial venture can be tough.

“There’s a level of desperation that is present before you take a leap,” says Thigpen. “Maybe ignorance too.

I say that respectfully,” he says. “It can be important because if you knew what is ahead, you might not take the path.

For Thigpen, the incubator and collaborative environment helped cement his entrepreneurial conviction.

“I didn’t like change,” says Thigpen. “But, as I’ve gotten older, I realize change is inevitable. My mom used to remind me (you) study long, (you) study wrong.”

It’s important not to overthink things.

“You’ve got to follow your gut,” says Thigpen. “If you can’t make decisions, the world is going to pass you by.”

Both entrepreneurs came to that realization early in their entrepreneurial journey and began to take chances: Big, big chances. Their respective moves took them in and out of the city, but they always came back.

“I was in and out of Flint, but always kept my sights on the city,” says Thigpen.

“The brand of Flint was tainted long before the water crisis,” says Thigpen. “Since the 80s, Roger Moore’s film (Roger & Me) has defined this city and stuck to its brand. Worldwide, we look and feel bad. It was in my heart to do create something that was about our (invisible) culture.

“When you dig up the weeds,” says Thigpen. “You discover that there are a lot of good things here in Flint.”

And it’s that sentiment that inspired the Eight One Zero brand, according to Thigpen.

“I made the people of Flint my brand,” says Thigpen.

“Eight One Zero filled a hole,” says Thigpen. “It took two months to develop the logo, but only 30 minutes to sell our first two caps. And when it happened, I thought ‘wow, they bought this.’”

Since then, there’s been nothing but a steady stream of growth for the Eight One Zero brand.

Doing something cool for people who wanted and deserved the elevation was transformative, according to Thigpen.

“It’s all about the people,” says Corder. “It was an unselfish act. It’s honorable that the brand is not about him (Thigpen), but the face of Flint.”

Putting ego aside, letting go and paying it forward are key, according to the two, who have collaborated on ventures from the start of their relationship.

Corder included the Thigpen in a music video early in his entrepreneurial journey and things just “clicked” from there, according to Corder.

“I wouldn’t have made the leap without his (Thigpen’s) support,” says Corder, whose career drove him to New York where he lived on five dollars a day.

“And that included transportation and food,” laughs Corder.

“You go to New York to get schooled on the hustle,” he adds. “Then you go to LA.”

NYC can be one of the biggest and loneliest places in the world, according to Corder, who says that New Yorkers do everything “fast.”

“They think fast. They move fast. And, if you don’t move quickly, they will step over you and leave you in their dust,” says Corder. “They really taught me to hustle.

“You never know when those leaps are going to pay off,” he adds. “It may take years before you see that the move that scared you most was among the most pivotal in your journey.”

New York was that for Corder and Thigpen, who moved in and out of NYC at various points in their careers.

Thigpen arrived to NYC penniless, but he “knew he needed to be there.”

Beats X Beers was created at Thigpen’s apartment, where the two often collaborated and commiserated with serial entrepreneurs like themselves.

“Everyone was broke, but we were laying down jewels,” says Corder.

One of them was the B&B brand, according to the music producer, whose early work landed him at the BT Awards.

Their early collaborations helped cement and elevate their brands.

“We’ve gotten into places and opened doors together, that we would never been able to on our own,” says Corder. “And, we’ve learned some important things along the way

As long as you can make yourself standout and project it, others won’t let you go too far, according to Corder, who has collaborated with Kettering University and other Flint-based institutions.

“Always be working,” says Corder. “Mama Sol taught me that.”

Work only finds people who are working is among Mama Sol’s many adages, according to Corder, who recognized that it’s that “tireless … go the extra mile no matter what…never stop” level of commitment that propelled the national music artist’s career forward.

And neither does he.

“When you don’t keep it going, lethargy sets in,” he says. “There have been times I thought I didn’t want to do this anymore.

“But when it’s an undying passion, you are going to come back,” says Corder. 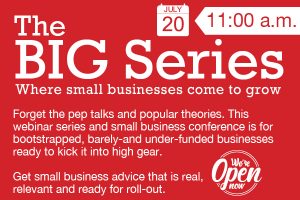 And coming back is a part of Flint’s calling card and its future, according to the hosts.

“If you see an opportunity, share it” says Thigpen. “That’s what is going to get us through. We’re in this together.”

Editor’s Note: This post is supported by Inter-Faith Small Business Alliance, the founder of The BIG Series, which is hosting a small business wevinar on  July 20 at 11 a.m. Click this link to register for the free event.

Check out Beats X Beers events on their website, facebook or Instagram page. Register to attend Beats X Brunch events on the event page. Get in on the vibe here.