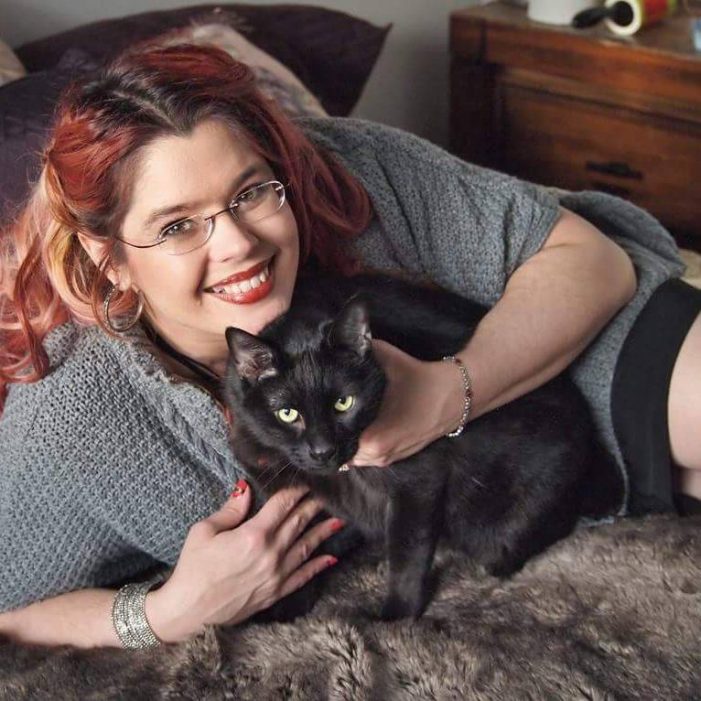 It’s not often that one comes across a compassionate figure like Angela Alexander-Roth. Founder of the organization Alley Cat Angels of America, she has the patience of a saint and the tenacity of a marathoner, a combination of traits that serve her cause well.

Alexander-Roth founded the nonprofit in 2007, the year she moved to Flint with her husband, J J Roth, from Phoenix, Arizona. Saving cats – she would rather refer to as community cats than strays or ferals – is work she’s done since the mid-’90s. Her mission is simply no more homeless cats.

The broader purpose, though, is to serve as a resource for those who also want to rescue abandoned or lost cats and to help direct people to the right organization depending on their need. Alexander-Roth also helps with fundraising for the larger animal organizations.

The problem in Flint is “pretty bad,” she says.

Much of the homeless population is concentrated around mobile home parks and on farms, but there is also an issue in the city – “anywhere there is a lot of movement, including apartment buildings and certain restaurants,” she says.

The number one order of business is getting cats fixed. “It will prevent more homeless kittens from being born, and we need more people to be champions to help us,” she says.

To that end, Alexander-Roth works in conjunction with All About Animals Rescue (AAAR), the veterinary clinic housed in a former Boy Scout Building on Atherton Road.

While she provides support in many different ways to many different groups, she works primarily through AAAR since it shares her vision of helping homeless cats through spay/neuter.

AAAR performs a lot of surgeries, which can be done on kittens as long as they weigh at least two pounds and are eight weeks old. During one recent, fairly routine day, AAAR performed 120 spay and neuter procedures. The cost, whether the cat is homeless or a house pet, is $40. Dogs can also be fixed for $80. AAAR also maintains a clinic in Warren from which they transport homeless cats to Flint for surgery as well.

Grants to Alley Cat Angels, such as a recent one from PetSmart, enable its work.

“We have done more than 190,000 surgeries total in the last decade,” says Alexander-Roth.

Between January and March of this year, AAAR performed more than 10,000 surgeries fixing community cats in both Flint and Warren, almost 2,500 of those spay/neuters just in Flint, 551 of which were community cats.

Neutering is helping reduce the number of cars euthanized. Fifteen years ago there were approximately 20 million cats euthanized in the U.S. each year. That number now hovers around 3 million, and spay/neuter programs are at the heart of it.

Alexander-Roth also holds classes at AAAR’s facility, such as shelter building workshops and certification in the ways of trapping homeless cats. During the 2½-hour training sessions, she will cover everything from caring for community cats to dealing with pesky neighbors to helping an injured cat to trapping, for which she provides certification.

The organization also loans out 300 traps between the two clinics, which can be borrowed without the training, although Alexander-Roth highly recommends the instruction. Despite all there is to know, she will make exceptions for those who want to help. It’s compassion for the animals that continues to stir her soul.

“Each time I teach a class, I bring up compassion fatigue,” she says of the physical state that can accompany work like this.

Alexander-Roth knows from whence she speaks. She suffers from systemic lupus, the chronic inflammatory disease that causes severe fatigue and joint pain and swelling, among other symptoms. It had her bedridden for the greater part of eight years.

“I could get up and down out of bed and had good days and bad days,” she recalls.

Despite her somewhat dire medical situation, Alexander-Roth always dressed up, even while in bed, to lighten her emotional load. “It was funny, and kept my spirits up. It was important for us to laugh every day,” she says.

Oddly enough, making the move to Flint a decade ago may have been good for her condition as well. Half way into the ride, Alexander-Roth says she started to feel better – much better. “It was then that we knew we had to make this place our home,” she says.

As soon as Alexander-Roth and her husband settled in Flint, she started trapping the animals in her neighborhood. One of her neighbors requested her help with the many cats that had gathered around her house.

The one piece of advice Alexander-Roth tries to impart more than anything is that cats are resourceful, needing water most, as well as food and shelter. A heated water bowl for the winter especially will help prevent water from freezing.

Not all cats need to be domesticated, she adds. Some are better left outside and not brought into the home.

“It’s important to honor the nature of the cat, especially if they are feral,” she says. “If a cat comes around for more than two weeks though, they need to be trapped and fixed.”

Alexander-Roth is also a trained massage therapist and metaphysician, finding the energy healing modalities incredibly helpful for both animals and humans. She runs the Earth & Sky Metaphysical Center, which seeks to help people reach their highest potential. She gives talks, conducts meditation, teaches classes and practices Reiki, a Japanese healing and relaxation technique that she also uses on cats.

“It’s sort of a laying-on of hands,” she says of the practice that’s been part of her life for 25 years. “It kind of works miracles, especially for the animals.”

The cat’s meow: Alley Cat Angels is dedicated to saving homeless cats, one feline at a time added by Cindi Cook on 05/17/2018
View all posts by Cindi Cook →