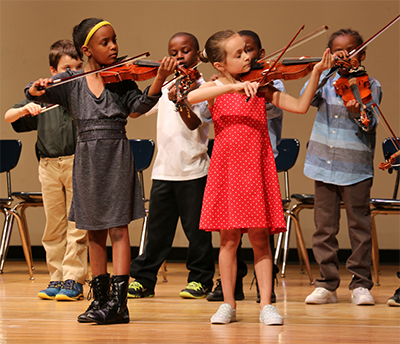 If your elementary school music class was anything like mine, you listened to an ancient record of Peter and the Wolf, learned songs for pageants (with lyrics half the kids didn’t remember), and a bunch of other stuff you can’t remember … despite a memory of being in the classroom.

Well, then perhaps it is a good thing not everyone believes that should be how kids enter the world of music.

Sphinx Overture offers its own music education to some schools in Flint and Detroit. In these classes, second and third grade students learn to play the violin.  These beginner lessons are free and the instruments are provided.

Over the course of a year, the students learn the basics of playing the violin, ending in a recital in May. While that is the chance to show off a year of hard work and skill, there are usually other performances.

There is a typically holiday concert and sometimes special shows. For example, last year, Eisenhower Elementary organized a performance at a local soup kitchen.

Sphinx Overture has been a part of Flint schools since 2006 and has partnered with the Flint Institute of Music (FIM) the entire time.

Jove began learning violin at age five, so she brings a personal outlook on how to nurture and teach a young violinist.

The goal is to teach kids how to play the violin and instill an appreciation for classical music. But it goes beyond that.

These skills are, unsurprisingly, transferable to everyday life and Jove says she has gotten compliments on how the program has affected their students.

An email from a faculty member at Eisenhower Elementary said the six students involved had higher grades, focused better, were more organized, and more disciplined than the average student in their grade.

Once in the Sphinx Overture class, it isn’t all discipline, scales, and finger placement. The kids are also exposed to many types of music and develop an appreciation for it. This is done, in part, with guests, who stop in and teach the students about the type of music they play.

For instance, a blues musician taught the kids how to play a guitar and how to improvise in music, a skill that may not be touched on by other music education programs.

Sphinx Overture has 135 students in Flint, with 12-17 in a class, spread out among the following schools:

When the Sphinx Organization, which is headquartered in Detroit, seeks out new teachers for the program it always strives to find applicants with both music and teaching experience.

Some parents may wonder about how focused the program could be in Flint with the resources split with Detroit. Jove stays in contact with all the schools, teachers, as well as the FIM. She frequently drives to Flint to meet with the group to keep everything running smoothly.

Overture was honored in 2016 with the National Arts and Humanities Youth Program Award (NAHYAP). Select students from Flint and Detroit went to the White House to receive the award from then-First Lady Michelle Obama.

The NAHYAP has been given out to 12 awardees every year since 1998. It supports after school programs that provide a safe place for kids after school, evenings and weekends, and promotes educational success in the country’s at-risk neighborhoods.

Plato once said “music gives a soul to the universe, wings to the mind, flight to the imagination and life to everything.” It certainly seems kids in Sphinx Overture are getting a head start on all four.

Applications are accepted for now for Sphinx Overture this school year. The program starts in late September and runs until May. To apply, please click here.

For more information contact Jacqueline Jove at 313-877-9100 ext. 708 or Jacqueline@SphinxMusic.org.

— Top picture: Students perform at the Flint Institute of Music.