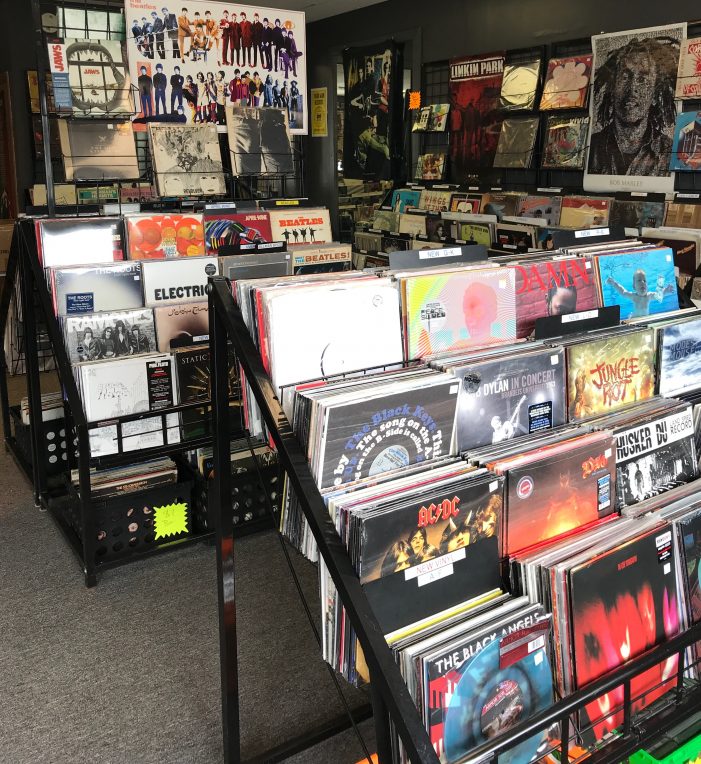 Vinyl records have seen a consistent rise in popularity as once again everything old is new again.

Flint’s record stores are feeling pretty good about the growth.

While two local music shops have emerged out of the recent Flint revitalization, there are independently owned music shops in Flint that have survived more than 30 years.

While the Flint area may not have the number of record stores areas like Ann Arbor and Detroit have, we do have the essentials worth digging through. Abundant with variety and not lacking in character, all the owners have a similar drive – to keep the hard copy alive.

The youngest of the group, Electric Crown Records is owned by Flint native Mike Plasha. It opened in September 2017.

While he carries all genres of music, Plasha works to highlight local musicians.

“I try to give people in bands in the area an outlet for their music because there is nowhere to do it,” he says. “I work with local bands like Lemoncollies to old bands from way back when I was a kid. Guilty Bystander, and King 810, they are big, but local.”

Electric Crown Records is also the only record store in Genesee County participating in Record Store Day, according to Plasha. The day celebrates the culture of the independently owned record store, and features special releases of vinyl pressings, turned into a surprising success for the record store.

“We had our first Record Store Day in April. When we showed up there was a line around the building, which is pretty cool,” Plasha says. “There were people who lined up at 6 a.m. and we don’t open until 9 a.m. We had a DJ and it was a huge success. We will expand next year, too, and we are planning something big for our birthday in September.”

When local attorney, Dean Yeotis expanded his business from his record shop in Ferndale, Found Sound, to Totem Books in Flint, the record collection was small yet carefully curated. Over the last few years, the store has expanded its vinyl to meet customer demand.

“Since we started this store, vinyl tends to move a little faster than the books do,” says Totem Books employee, Carlos Avila. “We just brought in three more bins for music because the demand was increasing. We have a couple thousand vinyls in the store and the largest collection in Michigan. We literally have warehouses full of vinyl, so if someone has a request, we most likely have it.”

Boasting Hour Magazine Detroit Record Store of the Year awards, Yeotis is confident in his know-how. His motivation with the vinyl business is to continue passing on a musical legacy.

“Records are cultural artifacts and not every album has been reissued, so the vinyl that we are keeping alive and circulating is important,” he says. “It’s important to our cultural legacy when it comes to jazz and blues. These are American art forms that some people say are the only art forms that we have produced.  If it weren’t for record stores, much of that legacy and culture would be wasted.”

Owner Pete Flanders has been running Musical Memories for 34 years at the same location.

“When we first started out it was all records, and then through the years we have gone from records to cassettes to CDs and now we’ve gone back to records,” says Flanders, “At one time we used to stock 15,000 to 20,000 records. Now we stock probably 5,000. The record business in Flint is better than what it was, but it’s not like we are in Detroit or any of the Detroit suburbs where there are many record shops.”

Musical Memories stocks a lot of R&B, classic rock, jazz, and some classical. The best-selling titles are the classic rock of the ’60s and ’70s, such as The Doors, Bob Dylan, Bob Segar, The Beatles, Led Zeppelin, Pink Floyd and The Who.

While Musical Memories has lasted several decades and pulled through ups and downs, Flanders isn’t immune to worrying about the future of businesses like his.

“The whole idea is to get records in the hands of somebody to enjoy the music because the reality is once record stores like ours go out of business, the music dies because the younger generation has no idea the music of the past,” says Flanders. “We are kind of the keeper of the flame.”

Going on 38 years, Music Planet is the longest operating music store in the Flint area. Owned by Carter McWright, the store is sustained by the same reason he opened his business in 1980 – the universal love of music as part of our humanity and a belief in the importance of hard copies of artists’ work.

“A lot of people want the hard copies so they can read the credits and have the artwork. Plus, if you have an artist who is special to you, who goes in the studio and makes good music, you want to support that artist so he or she can keep on making music. You don’t want people bootlegging it or things of that nature, you support good music.”

Music Planet has CDs, albums and cassettes. Back To The Bricks classic car owners who don’t want to switch their cars over to CD can still find old cassettes at Music Planet.

“We are trying to see what is going to happen,” says McWright. “We do fair with gospel, blues and jazz. Hip hop has slowed because people are downloading. What sustains us is that we keep a lot of oldies in all genres that are hard to get. That is the difference. That is why we are still here. We just want to be there if you need us because we need you and we don’t plan to go anywhere.”