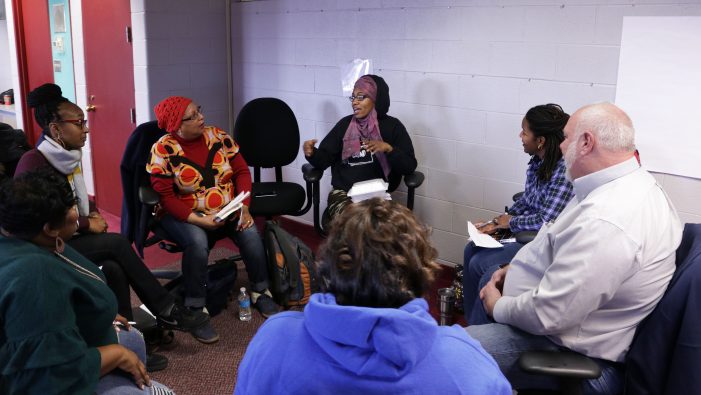 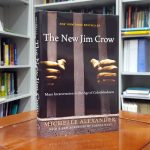 Book clubs don’t have to be held in living rooms.

The University of Michigan-Flint is taking the concept of reading and discussing literature together beyond any set of four walls and into various locations throughout the community.

For the past year Community Read, a concept based on a national initiative, has brought together diverse groups of educators, students and the larger community to exchange thoughts about writings that address social issues.

Along with improving literacy, the greater goal is to promote understanding and cultural awareness by neighbors who often hold different perspectives of common issues they face during a politically charged time in America’s history.

“We started off really small, but we’re starting to branch out,” says Svoboda. “The Community Read is about focusing more on examining issues of social justice through the reading books.”

Book titles are chosen according to their subject matter’s relevance and planned themes of dialogue “especially within Flint and with the political climate we’re in today,” Svoboda says.

“We have such great discussions every time and we just want to focus on continuing to give enlightenment,” she says.

The current Community Read book is The New Jim Crow: Mass Incarceration in the Age of Colorblindness, a New York Times Bestseller by civil rights lawyer and legal scholar Michelle Alexander. Inspired by the election of President Barack Obama and talk of a “post-racial” America, supposedly free of wholesale conflicts that sparked the civil rights movement, the book challenges notions of freedom. The New Jim Crow suggests criminalization through the justice system impacts the black community in ways similar to color segregation.

“Cotton’s great-great-grandfather could not vote as a slave,” Alexander writes in the introduction. “His great-grandfather was beaten to death by the Ku Klux Klan for attempting to vote. His grandfather was prevented from voting by Klan intimidation. His father was barred from voting by poll taxes and literacy tests. Today, Javarious Cotton cannot vote because he, like many black men in the United States, has been labeled a felon and is currently on parole.”

Community Read participants have explored a chapter each month before getting together to discuss the book on Saturday mornings. They will continue reading The New Jim Crow until May.

The next meeting will be held at 11 a.m. on Jan. 13 at Mott Community College in the common area next to the library. The public is welcome, including children, who can attend youth programming supported by the Ruth Mott Foundation, during the adult dialogue. The foundation and the Flint Literacy Network have partnered to provide books for those interested in participating.

Launched in 2016, Community Read is an offshoot of the six-year-old Common Read program that brings authors to University of Michigan-Flint to discuss books faculty, staff and colleagues have chosen. Past titles of the program include Between the World and Me by Ta-Nahesi Coates, We Need New Names by NoViolet Bulwayo, and Dead Man Walking, the book that inspired a film starring Sean Penn, by Sister Helen Prejean.

Averaging 15 to 20 participants, the Community Read events bring lively exchanges, Svoboda says, adding 2018 will have more of a focus on discussions that interest high school students and young adults. Angie Thomas’ The Hate U Give, which examines police shootings of black men, is a title that’s been chosen for spring.

“Flint is a majority-black community,” says Svoboda. “I am a person of European descent and I think we’re looking to understand.”

A white woman raising a Hispanic son has been among guests attending past events, adds Svoboda, who recalls the woman’s desire to learn more about issues facing youth of color. Along with social awareness, Community Read has goals to help elevate Flint’s collective education.

“Some of the outcomes we’re hoping for are to create a community of critical thinkers, as well as to increase some of the literacy in the area,” says Svoboda.

The program draws from the nationwide One Book, One Community model, supported in cities like Chicago, New York and Lansing, says Svoboda.

“If you see someone at the coffee shop or on the train reading the same book as you, it’s an opportunity to have a discussion,” she says. “We’re trying to bring that same idea to Flint.”