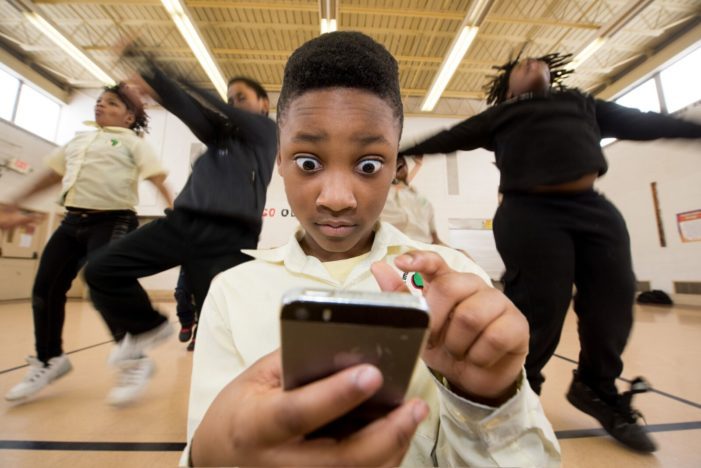 It’s time to give kids a 1980s summer. Get them up off the couch. Shut off the TV. Take away the cell phone, the iPad and the Wii and send them outside to play.

Tell them to knock on the door and get other neighborhood kids outside to play baseball, ride a bike, climb a tree, play King of the Hill or hide and seek … whatever. Just get them moving.

Kids need to move and the little bit of exercise they get using their cell phones, Wii, iPad and other devices certainly isn’t enough.

A survey of 800 mothers done by professors at Manhattanville College showed almost three-quarters of those moms played outside every day when they were kids. Only a quarter of them say their kids do the same. Instead they spend their time on cellphones, iPads, computers and so on.

-“Whether it’s healthy eating, or being physically active, or being on your phone, it’s learned from the adults in their lives.”  -Kristen Kaszeta, Building Healthy Communities Program Manager, Wayne State University

The Kaiser Foundation found kids ages 8 to 18 spend an average of seven hours and 38 minutes with their eyes glued to the devices. It gets worse. According to an article in Tech Advisor, by the age of seven the average child will spend a year of 24-hour days watching recreational screen media and during their childhood they will spend more time watching TV than they do in school.

Danielle Thomas knows the feeling. She lives it every day. Her 9-year-old daughter is “addicted” to her cellphone and Wii game console. “She might do some homework on it (the cellphone),” Thomas says.

Sometimes Thomas has to impose a break period.

“I tell her, when I was a kid, I went outside to play,” she says. “Kids don’t go outside and run around anymore. They’re in front of the TV or on the phone. That’s the only problem, I have with it. Otherwise, I’m fine.”

LeRoyshia Flores’s 10-year-old owns a cellphone and a tablet. She limits her time by taking the devices away and encourages reading books and taking family outings.

“You have to do other things with them so they can put that technology down,” Flores says. “We do a lot of family games, or I’ll take her to the movies to get her away from the phone.”

Some of their favorite games to play as a family are “Life” and “Sequence.” These excursions are designed to keep her daughter’s mind engaged. While she understands why most parents allow their children excessive time, there’s still no excuse.

“Engage the children,” Thomas says. “Some parents give them devices to keep them busy, but they don’t concentrate on anything else but those devices. Have them read. Take breaks. Definitely take breaks.”

Children need those breaks and they need to exercise during them. A lack of exercise can lead to all sorts of health issues, not the least of which is child obesity, a serious and growing problem. Exercise can help with that as well as other things.

A study reported by Optometry and Vision Science found children who spend time outside have better distance vision than those who spend most of their time indoors.

Their social skills are better and their attention span increases. Studies have shown that playing outdoors can reduce ADHD symptoms in children. Chances are if send your child outside to play he or she will be able to sit still in school.

Playing outside also reduces stress and gives kids the Vitamin D they need to have healthy bones and reduce the risk diabetes and heart problems later in life.

They do, however, need to spend time at their devices. Teachers are giving assignments that require mobile devices and that promises to increase.

Kristen Kaszeta, manager of the Building Healthy Communities Program at Wayne State University, says screen time can be tricky because it’s clearly a necessary skill for children to learn.

“Technology is going to be a major part of the future workforce,” she says. “First, try to align it with the federal guidelines. No more than two hours a day of non-homework screen time.”

As for taking away devices, parents need to take responsibility as well, she says. Part of the challenge parents face is putting away their devices if they are asking their kids to do the same.

A study by the YMCA points out 42 percent of parents blame technology for their children’s lack of exercise, but they are partially to blame. They spend about 53 percent of that time playing video games with their kids or doing other screen activities.

“Whether it’s healthy eating, or being physically active, or being on your phone, it’s learned by the adults in their lives,” Kaszeta says.

Once you put down the device, what’s next?

Find things to do together so the devices stay home.

“I try my best to be physically active and that makes them want to be active,” says Shannon Carney-Oleksyk, healthy living advisor and Building Healthy Communities program manager at Blue Cross Blue Shield of Michigan. “Family bike rides, walks, trying to be a good role model in that area. You’re not at home. The TV is not on, and kids are getting more steps, which is what we always want.”

And, there’s always staying home with your devices. Just turn them off for a while. Carney-Oleksyk believes most parents don’t utilize the space they have at home. Even a smaller spaces can be used for physical activity for the whole family.

“It takes extra effort,” she says.

Building Healthy Communities (BHC) has been around for more than half a decade, helping to shape healthy school cultures across Michigan.

One Response to "Power Off: Why kids need a break from technology"