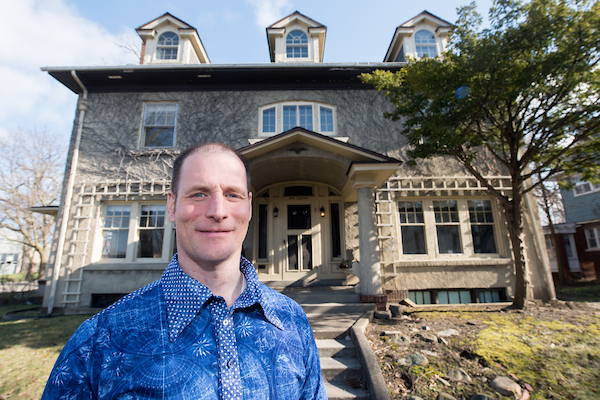 When Andy Watchorn went looking for a house in Flint he chose a place within walking distance of the Longway Planetarium and the Flint Institute of Music, so he could enjoy his favorite pastimes without charging up his Chevy Volt for an expedition.

“I’ve lived in Austin, Texas, Chicago, Ill. and other places and I like the attractions in Flint’s Cultural Center best. There is often something wonderful going on at one or more of the venues,” he says, noting he also frequents the bar and restaurant scene downtown.

Another advantage? He can get more house, per square foot, in Flint than in most major cities.

Watchorn is renovating a 1916 house built by Joshua G. Manwaring, a medical doctor whose business thrived in the early decades of the automobile. In 2015 he paid $95,000 for a stucco building with three and a half bathrooms, 4,300 accessible square feet, and miniature drinking fountains in several rooms. Hardly any showers or toilets worked. Several rooms had huge holes in the ceiling.  He might have to invest another $100,000 to make it functional.

“The walls are stuffed with concrete and horsehair. The dining room is lined with oak cabinets on four sides. The upstairs kitchens have genuine Frigidaire appliances from the 1950s. To rebuild a jewel like this the insurance company tells me it would cost $850,000,” Watchorn says. Homes in the neighborhood range from $36,000 to $150,000, depending on size and condition.

He had to put a new roof on the garage before he
could move in.

Watchorn is not only a home-renovator, but an entrepreneur, music educator, engineer and unabashed Flint promoter with two degrees from the University of Michigan. He works as a technical salesperson for National Instruments and his customers are tier one automotive suppliers. Watchorn leases space to entrepreneurs in his downtown Flint building on South Saginaw, including a shoemaker, a tailor, an urban clothing company and a tech start-up of his own.

“I’m passionate about teaching and learning as acts that make people powerful,” he writes on his Linked-In page. “Whether helping design experiences that help people to express themselves through engineering, engaging, or emoting (particularly with music), you’ll find me working to help build skills within the communities where I am involved.”

During the day he applies technology platforms to designing, validating and producing products, and devotes evenings to helping college students get certified in technology applications.

Watchorn delivered a 2014 TEDx talk on building communities, drawing from his experience as a student teacher at Flint Central High School, a co-op student at Delco Electronics, and life experiences teaching and mentoring. His students and colleagues gain a fine mentor who is devoting this part of his life to Flint’s betterment, when every hand on deck is needed.

“Real estate is slowly coming around…You can see evidence all around the city of restored buildings.” -Andy Wachorn, Flint resident and community advocate

Four of the five biggest factories closed: AC Spark Plug, Buick, Chevy in the hole, Fisher Body and GM
Truck and Bus. Only one is still operating, what is now called Flint Assembly.

“Add on to that more losses from the trend toward suburban living and the problems surrounding the Flint water crisis,” Watchorn says.

“Real estate is slowly coming around,” he adds. “This community is doing a great job under the circumstances. You can see evidence all around the city of restored buildings.”

At the turn of the 1900s when Watchorn’s house was built, William Crapo Durant, who owned Durant Dort Carriage Company with Josiah Dort, forged General Motors Corp. Dort brought Buick to Flint and folded it into GM. Charles S. Mott came to town at Durant’s request and became a GM executive and board member who helped shape the Cultural Center, which is an unabashed pride source to Flint.

Watchorn walks often to the Flint Institute of Arts with its 8,000 pieces, the Institute of Music where the Flint Symphony Orchestra practices, the Flint Youth Theater, the Longway Planetarium and the Sloan Museum of History, Culture and Technology.

There is also the Whiting, a 2,000-seat performing arts center, Mott Community College and the Mott estate, Applewood. All are patrolled by a separate police department, which assures him protection as he saunters home from a concert.

Watchorn is exploring ways to help revive his home and others on Kearsley Street.  Retrofitting 100-year-old houses for modern use takes considerable money, sweat equity and big dreams. He needs to repair or replace much of his house’s exterior, plus the windows and interior walls, which is no small task.

For the most part he lives on the second floor, using the master bathroom, a music room and a spare bedroom where his mother and out-of-town friends stay during visits. Watchorn plans to use the first-floor living room for small concerts and fundraisers. The main kitchen and third floor maid’s quarters need considerable rehab.

Another jewel in the Cultural Center neighborhood is the Whaley House, a Victorian Queen built in Flint’s guilded age when it was a national supplier of carriages and buggies. Currently it is managed by Samantha Engel, a close friend of Watchorn’s who hosts events and community meetings to share the history of Flint, the Cultural Center and the personalities who made it famous.

“The more you know about Flint, the more you come to love it. You’ll move here and be a part of making it prosper,” Watchorn says.

With the help of the Longway Planetarium, he can see stars and unlimited possibilities.