While he is a veteran, national promoter, event organizer, and music producer, or “influencer,” as he prefers, 2019 has been particularly significant for his work in his hometown Flint. Ranging from a high-profile partnership planning entertainment for Kettering University’s 100th anniversary celebration to his biggest local event to date, the 3,0000-guest Block Party in August, the Beats x Beers founder has expanded his community imprint. As he prepares for what he expects to be a groundbreaking New Year’s Eve event, Corder says he’s glad that he’s been able to open doors for other entrepreneurs aiming to bring national flair to Flint audiences.

“I think it’s the aesthetics that give it more of a global appeal,” says Corder. “The attention is in the detail of it all, from the design to the execution.”

While he is careful to acknowledge the work and success of other local artists, managers, concert promoters and event organizers, Corder says he has also distinguished himself by attracting major talent to perform in Flint, raising local expectations. Platinum-selling artist Wale became the first nationally known hip hop artist to perform at downtown’s concert venue, the Capitol Theatre, in February, further cementing Corder’s reputation as a force on the entertainment scene.

As recently as Dec. 7, Beats x Beers hosted “Toast,” an upscale celebration at a Flint auto storage facility. The location added the kind of the stylized touch that Corder says has helped generate interest in his events and build his reputation.

“It builds up over time after a while and I become a quality, trusted source,” he adds.

“Consistently executing the events that I’m known for now is what I’ve done all year,” he says. “That’s what set me apart.”

For New Year’s Eve Corder says he’ll produce another event that will give Flint residents a reason to stay in the community, rather than seeking entertainment or celebrations outside the city. Capitalizing on the 23-week run of an event known as “Beats x Brunch” at 501 Bar and Grill downtown, Beats x Beers will host an evening version that includes an “upscale” meal, select drinks and multiple DJs providing entertainment. The 10 p.m. to 2 a.m. celebration is designed do create a “big city” feeling within the intimacy of downtown Flint, similar to other New Year’s Eve celebrations in Detroit and other locales within driving distance, he says.

“It’s my duty to give them something to facilitate their staying within the city” he says of the audience. 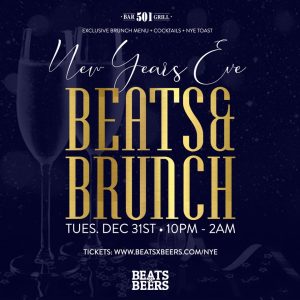 While there is a specific business model he applies to the planning and execution of most events, Corder says the true measures of what has distinguished him from other entertainment companies are drive and focus.

“I don’t think its anything that’s so special, other than the passion behind it and really caring about the people more than my pockets,” he adds. “I understand the long-term goal of what I’m building and I’m more focused on building the actual brand than on myself.”

Editor’s Note: Tickets for the NYE Beats & Brunch Event taking place at the 501 Bar & Grill are available at eventbrite.

The evening will begin at 10 p.m. and cross over into the New Year ending at 2 a.m. An exclusive NYE brunch is included with admission. Tickets are $30.