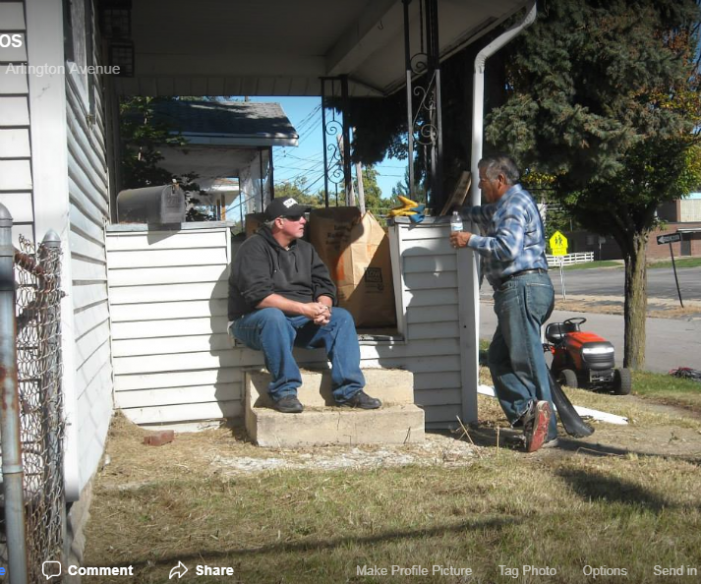 Regularity and routine. It’s what makes people feel secure and connected, like they belong and have a stake in something greater than themselves.

It’s this kind of thinking that goes into the monthly meetings of Flint Neighborhoods United.

On the first Saturday of each month, the coalition of block clubs, neighborhood associations, and crime watch captains and presidents meet at the Woodside Church on Court Street to share information and resources and host guest speakers. It’s all to benefit the caring Flint citizens devoted to making their city a better place.

“Collectively, we should make these (criminal activity) complaints. We should continue to use our voices, because if we stop and retreat back into our homes, they’ll  (Flint Police Department) believe that there is no problem, and there is.” – Carma Lewis, President, Flint Neighborhoods United

Working toward safe and healthy neighborhoods is, as the name might imply, the primary goal of the organization headed by Carma Lewis, who went from concerned citizen to the group’s president in only a few short years. Through her job as community outreach coordinator for the City of Flint, Lewis has her finger on the pulse more than most.

At a recent meeting, Sarah McDonnell, a project coordinator for the outreach office from the University of Michigan Flint, introduced the school’s new interactive mapping site, MapFlint.org.

Funded by the C.S. Mott Foundation, MapFlint enables organizations and individuals to view many types of city data obtained through the U.S. Census, including population, age, and income. That data will help them reach their goals, and the interactive map makes it more utilitarian.

The goal is to provide data that could answer basic questions, such as which neighborhoods have the most children, what are the current health statistics in those neighborhoods, or what might the overall needs be of any one population.

“This is a platform anyone can use, not just organizations,” McDonnell says. Her department will soon roll out a secured place on the site for groups to store their own data, which will be password protected for select users to gain access.

She says she will come back to the group in a couple months to talk to people about ways to continue to improve site.

MapFlint is expected to be a big help to many in the city.

Neighborhoods that hold a lot of events will be better able to pinpoint their areas of focus, Lewis says.

Gregory Timmons, executive director of the Michigan Area branch of the United Methodist Church, says the mapping system would help tremendously with the work he does as a board member for the Flint Children’s Museum.

“We recently purchased a traveling, interactive STEM-based museum for kids. Identifying those areas to bring it to would make a lot of sense,” he says.

Block clubs and neighborhood organizations can tap into the site for statistical information, especially when submitting grant applications, points out Emily Doerr, program manager for the City of Flint Department of Planning and Development.

“Attaching some of the data could perhaps make the application more robust,” she says.
Besides learning about the new mapping site, those attending the meeting brought up concerns.

Chris Zuwala, president of the Potter/Longway Neighborhood Association, attends the meetings every month and is never shy about voicing his feelings on even the most difficult or controversial issues. This time, it was gun violence.

“A sub-machine gun went off two nights ago in my neighborhood. I thought it was pretty pathetic that it was shot off next to a business but nobody reported it. It’s troubling that the citizens of Flint aren’t getting on the phone when they hear or see something,” he says, pointing out it was a Flint police officer who ultimately called the incident in.

Other attendees, however, say sometimes the police don’t respond at all. It’s one reason residents may only call once or twice and then give up, feeling calling any more is futile.

“Because that’s where a lot of funding could come from (to improve the neighborhoods),” she says. “Collectively, we should make these complaints. We should continue to use our voices, because if we stop and retreat back into our homes, they’ll believe that there is no problem, and there is.”

Lewis then steered the meeting toward thoughts for 2018.

“Now’s the time for us to start thinking about what our plans are for the winter time and the spring,” she says. “Some neighborhoods have started planning already, and we have a wealth of resources in our city to make sure we can implement those plans. I’d like for us to take this time to share.”

For her part, Doerr already has been in touch with various neighborhood organizations and is putting in place ways to make their plans take shape as she works with the city’s planning programs for next year.

The finished plans are available on the Imagine Flint website as well as in hard copy in the city’s Department of Planning and Development office.

“When people see that you’re excited about doing things, they get excited and they can also help steer you toward more resources,” says the United Methodist Church’s Timmons. “Don’t think the task is as big as it appears. You have a lot of people waiting to help you. You just need to make the first phone call. You’d be surprised at how quickly people will be there to help you.”

About Flint Neighborhood United
Flint Neighborhoods United is a coalition of block clubs, neighborhood associations and crime watch captains and presidents (or their designated representative). They come together on the first Saturday of each month to share information and leverage their resources to create positive change in the Greater Flint community. The group’s focus is from a city-wide perspective versus the focus of the individual members of a specific neighborhood or area within the city.

The group has three goals. They are:
• Improve communication among and between stakeholders at all levels
• Create and maintain an environment that supports safe and healthy neighborhoods
• Re-establish a city-wide sense of community with a shared responsibility

For more information about Flint Neighborhoods United and its programs, visit www.flintneighborhoodsunited.org.

One Voice: Flint Neighborhoods United keeps city on track and moving forward added by Cindi Cook on 12/10/2017
View all posts by Cindi Cook →