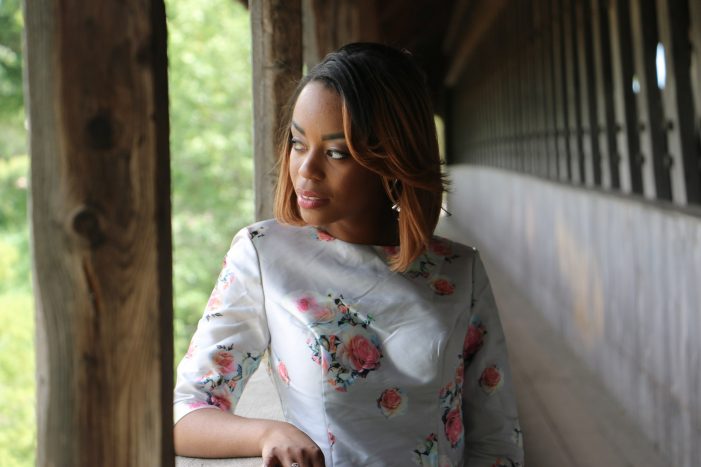 From an early age, Talisha Gilbert was fascinated by images of glamorous gowns and “big hair” in beauty pageants. At one point she developed an interest in modeling.

But she grew up without pursuing her curiosity about the industry or exploring the inner workings of stage competition.

At 19, Gilbert became a mother and accepted she’d only be able to enjoy the events as a spectator, since most guidelines prohibited contestants from having children or being married.

Then last fall Gilbert learned about the Ms. Black USA competition’s updated rules allowing women of her age and status to compete. At 27, she not only entered her first-ever pageant, she emerged with the title Ms. Black Michigan.

As a state titleholder, Gilbert is preparing to attend the June 28 national competition in Washington, D.C. While she is excited to experience a role similar to those she’s admired in other women, she says her motive for participating is to bring visibility to challenges facing Flint.

Her pursuit of the Ms. Black USA crown was sparked by a social media notice inviting women who were older than the competition’s traditional contestants and who were out of college to participate. Gilbert wrote an essay, participated in telephone interviews and submitted a photo. The two-month process led to her earning the Ms. Black Michigan crown in November.

“To win a state title on my first try, I was really surprised,” she recalls.

The journey toward Gilbert’s goal of a national title has just begun, as she’s made public appearances at Flint community events, including TheHUB’s Savor the Flavor of Flint, and introduced herself to local organizations.

Among recent efforts to buttress her Ms. Black Michigan platform of youth advocacy were her distribution of Valentine’s Day cards to Hurley Medical Center pediatric patients and attendance at a Martin Luther King Day fundraiser by Diplomat Specialty Pharmacy on behalf of Big Brothers Big Sisters of Flint and Genesee County.

A banking professional, Gilbert says she’s seldom recognized while at work, but still getting accustomed to double-takes in the community by those who’ve seen her smile beneath a sparkly crown.

“You get stares sometimes and a lot of the time people just want to come up and take a picture with me,” she says. “I’ve always been one who tried to blend in rather than stand out, so it’s taken some adjusting for me.”

Born and raised in Flint, Gilbert was impressed by high school instructor Gloria Barnett’s insistence that she and other youth could impact their community, even as students. Gilbert developed a passion for advocating goodwill and social awareness, creating a website to advertise her work supporting non-profits.

“I wanted to promote that philanthropy doesn’t just have to be something rich people do,” she says. “What I’m trying to do is demystify that concept and make people realize that philanthropy isn’t just about giving away large amounts of money, but about doing whatever you can to benefit your community, whether it’s volunteering time or committing yourself to specific causes.”

Gilbert plans to use her reign as Ms. Black Michigan and, hopefully, Ms. Black USA, to call more attention to the need for support on behalf of Flint’s youth, particularly those impacted by the city’s water crisis. Gilbert’s 7-year-old, who resides in Flint Township, has shown no signs of lead exposure, but some of his friends and peers have been affected.

“They’re still a part of my community and I still feel like it’s my job as a mother, as a citizen of Flint, to help,” she says.

As a Sunday school teacher at Victorious Word Church, Gilbert says she has encountered some children who are lead-exposed and show developmental delays. Her own efforts to provide encouragement and special attention, even during the limited time before church service, has yielded dividends she’d like to see replicated throughout the community, Gilbert says. Education and greater access to the arts are part of her advocacy’s focus.

While Ms. Black USA is less traditional beauty competition than contest to identify women who’ll help address issues affecting people of color, Gilbert says fitness is an aspect of the national pageant. She’s courting sponsors and supporters who might assist her with expenses like an evening gown and travel to the summer showdown.

Reta Stanley, president and CEO of Big Brothers Big Sisters of Flint and Genesee County, says Gilbert has “extended herself” to the organization “and is a wonderful asset for young people.”

“She is a positive role model for our community,” she adds. “We are appreciative of her spirit of giving and helping young people achieve their dreams.”

To learn how you can support Talisha Gilbert in the Ms. Black USA pageant or how she can help you with fundraising for your non-profit email msblackmichigan@gmail.com or visit TalishaNicole.com.