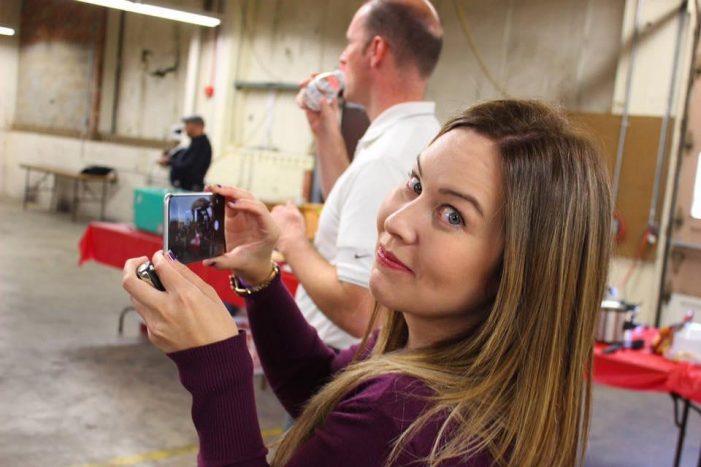 Women in Flint and Genesee County are propelling themselves to new heights. Their numbers are impressive: At 5,500 and growing, they are helping fuel Michigan’s ranking at the top of the nation for the growth of women-owned firms since 2014. The HUB Flint will highlight some of these achievers in the coming weeks. Meet Adrian Montague.

There are many forces that feed Flint and Genesee County region’s economic ecosystem. Adrian Montague, the founder and director of Flint SOUP, ranks high among its business drivers.

The SOUP program, which promotes community collaboration and fundraising for grass roots efforts, has had a far-reaching effect. Yet, its formula for success is deceptively simple:

Invite large groups of people willing donate at least $5 for a bowl of soup, salad and bread to hear a business pitch and vote on their favorite.

The event has drawn from 20 people to hundreds, according to Montague, who happily awards winners with small grants needed to fund business efforts.

Over the past eight years, Flint SOUP  has elevated the interest and aspirations of hundreds of entrepreneurs and area business leaders under Montague’s steady leadership. But it’s done more than that, according to Flint SOUP’s female cohorts, who credit Montague for bringing positive attention to a largely invisible cadre of women-owned businesses.

“Individually, even the most successful women-owned businesses can be overlooked,” says Charma Dompreh,, the founder and principal of Charma’s Green Chips, who says she gained public acclaim, funding and expansion opportunities as a result of her involvement in Flint SOUP.

As important, according to Dompreh, is the on-going mentorship, guidance and support that Montague provides to entrepreneurs.

“She’s among the most genuine people I know,” says Dompreh. “Adrian is constantly reaching out and connecting me to resources to spur my business growth.”

Her efforts are particularly important to underrepresented business owners, according to Dompreh

“Adrian has reduced the likelihood of that by drawing out our community’s hidden talent and placing many women like me center stage at Flint SOUP events. There’s strength in numbers,” says Dompreh. “When you see the number of women- and black-owned  businesses who have walked onto that stage, we become harder and less likely to be ignored.

“Her efforts have opened doors for me with fellow entrepreneurs who have knowledge to share and investors who have access to capital,” Dompreh adds.

In the last two years alone, the event has had 100 start-up and small business entrepreneurs take the stage, according to Montague, who notes that even those participants who don’t walk away with funding are winners due to the exposure they get from the event, which attracts external investors and community financial institutions.

“The cool thing about SOUP is it’s community-driven,” Montague says. “Attendees to the event make a $5 donation. So it’s actually the donations that fund the micro-grant for the new businesses. One hundred percent of the donations are given to the presenter with the most votes.”

The inspiration for Flint SOUP began with Montague witnessing the success of Detroit-area SOUP events.

“I was already interested in entrepreneurship. I was introduced to the SOUP model of residents funding themselves. I fell in love with the idea,” she says. “I kept hearing three things: ‘I have an idea and I don’t know how to start,’ ‘I don’t know where the resources are,’ and ‘I don’t have any funding.’ I really wanted to see the same start-up activity in Flint as in Detroit.”

“For the next four years I self-funded Flint SOUP,” she says. “I just knew there were other people dreaming of a better city and I just needed to find them, and we did. It’s been great.”

In the last two years the organization has seen more than $30,000 in community-funded micro-grants raised for grassroots startups in Flint.

“People that stay engaged with our community of support increase their average household income by $30,000 over a year and a half period,” Montague says.

“The vast majority are black-owned or women-owned businesses, which is really awesome,” she says. “We get a lot of word-of-mouth advertising from simple Facebook posts or asking around.”

An estimated 436,486 women-owned businesses in Michigan employ 254,837 residents, she adds: “It’s really encouraging. I think it parallels other countries. Usually, women are the ones leading change.”

She says the growth rate of women businesses in Michigan is likely due, in part, to public policy and state support of entrepreneurship.

“The last governor’s office really made a point to fund a lot of start-up activity,” she says.

Montague also says more black-owned businesses have also popped up because of the women who paved the way. Women-owned businesses will really provide a great compliment to the larger community she says.

“You need both masculinity and femininity in businesses because both perspectives are so critical for the development of cities,” says Montague.

And that’s soup for the soul.

Adrian Montague can be reached at adrian@flintsoup.org

This series on Flint and Genesee County entrepreneurs is sponsored by Metro Community Development, a community development financial institution and originator of BizBox, a 360 degree business program that includes training, development and financial support.  To learn more call 810-767-4622 or visit metrocommunitydevelopment.com

Meet Adrian Montague: A formidable force behind the growth of women-owned businesses added by Tanya Terry on 11/10/2019
View all posts by Tanya Terry →