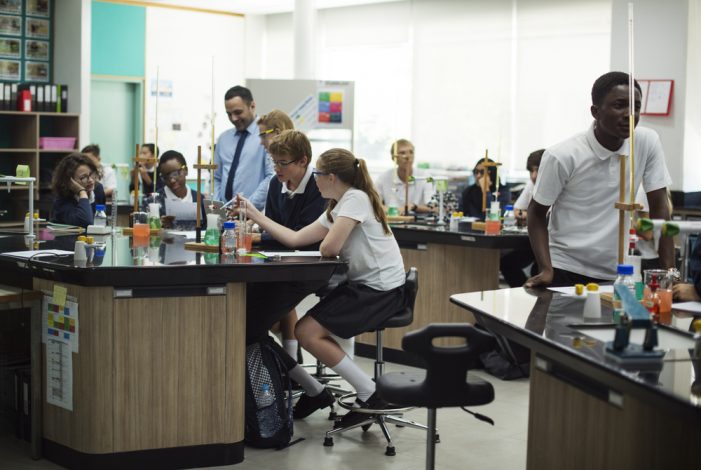 It’s May and a third grader – let’s call her Susie – is having trouble grasping math. She keeps struggling, but when June comes around her grades are good enough and she is passed on to fourth grade. There she’s expected to be ready for math at that grade level, but she isn’t and most likely will never catch up. Her lack of understanding the subject may affect the rest of her life.

That problem and others are putting the future of Michigan students and the state at risk, says Roger Curtis, director of the Michigan Department of Talent and Economic Development.

“It is time to change that system,” he says. “Time is not the answer. It is a constant variable … We need to rethink education. We are looking at competency-based assessments, not standardized testing.”

In competency-based education students move on when they have learned the knowledge and skills they are expected to have at that level.

The State of Michigan has introduced the Marshall Plan for Talent to make that change and many others. Many schools in Flint are interested in finding out more, Curtis says.

Many schools, both K-12 and higher education institutions in the Flint area, turned out for recent Marshall Plan for Talent workshops. More than 80 education and business leaders participated in the Flint workshop, Curtis says.

The plan is geared to prepare the next generation for the 811,000 jobs that will need filling by 2024, as well as the 100,000 open now. It also aims to help older adults learn new skills and keep job-seekers in Michigan while attracting new ones from other states. The goal is to provide early career counseling and teach students to focus on life-long learning.

The state has set aside $100 million to jump-start the program and create educational collaborations around the state. Those dollars include $10.5 million for career navigators, who will help guide students toward their career and associated academic goals. They will have tools such as a web-based career exploration platform that connects students to internships, job shadowing opportunities, and other such options in their local area.

The Marshall Plan received bi-partisan support from the legislature and was signed into law in June by Gov. Rick Snyder.

The plan lets schools change the way they educate students to a competency-based approach, which it says will give students the high-demand skills and credentials they need for future jobs. It also allows funding to be used for equipment, additional staff, new curriculum, professional development, industry mentors, testing fees, and other tools schools need to implement the plan.

It all begins with Marshall Plan Talent Consortiums. They will be made up of groups of educators and employers who partner to change the way students are prepared for careers. To qualify for a grant the consortium must show innovation and creativity and have the administration’s support.

“We are looking for pioneers who want to get involved,” Curtis says, pointing out those pioneers must include employers and the educational community at all levels to quality for the grants.

“This is not just a K-12 issue,” he says. “Community colleges and training centers need to be involved … Colleges and universities must learn that 18-22 is not their audience. It must be life-long learning. Their targets are 16-60-year-olds.”

The talent consortiums must include schools, ISDs (intermediate school districts) and at least two businesses. They will create a detailed list of how many skills and abilities they need, figure out how big the educational gap is and how they will fill it.

For example, if welders are needed, the consortium would put together a program that provides competency training in high school where the student must master each level before moving on. The consortium would decide at what level employment would start.

Curtis points out too often the young people have learned the skills in high school but when they are hired the employer starts them at level one. As a result, they lose interest and move on.

“We need technology transfer to the workplace,” he says. “Employers need to create a co-op with those kids or we will lose them.”

The idea is to create certification programs that are project-based and focused on students, showing they are competent in the standards that lead to the credentials needed for high-demand jobs. At the same time it will prepare students for starting their career ladder and life-long learning.

Funding for the program also includes $20 million in scholarships and stipends for high school students and low-income residents to get high-demand credentials.

“We need to erase the stigma that a four-year school is needed to be successful,” Curtis says. “Manufacturing is not dark, dirty and dangerous anymore … We still need mechanical engineers, but there are a lot of other opportunities. It can’t be an ‘either or’ conversation with kids.”

Grant criteria will be available in September or October. The amount of the grant will depend on the size of the school and the number of people in the consortium. The consortiums are not bound by geography and Curtis suggests those interested should get creative and reach out across the state for partners.

“The Marshall Plan for Talent is about inspiring innovation across Michigan,” Curtis says. “Funds are available to those consortia who wish to take advantage of this innovative program designed to revolutionize Michigan’s education and talent development system.”

The Marshall Plan also creates the Innovative Educator Corps, which will receive stipends from the state and travel around Michigan to share their innovations with others. The corps will be made up of innovative educators nominated by their local schools.

Teachers may also get an extended education under the plan. Curtis says more externships – a temporary training program in a workplace – are needed for teachers so they become more in tune with the business community. That could be touring facilities or even taking a summer job at a business.

“That will change the conversation,” Curtis says.

Other states already have changed the conversation and are moving to competency-based education. It is making a big difference. For example, Sanborn High School in New Hampshire saw a significant drop in discipline issues after the state moved to a competency-based system in 2005, according to Digital Promise, which accelerates innovation in education to improve opportunities to learn. The number of freshmen reported for discipline issues fell from 433 during the 2007-2008 school year to just 84 in 2011-2012.

In Colorado, Adams District 50 was in the 28th percentile in reading nationally prior to adopting a competency-based curriculum. After the transition, the district climbed into the 71st percentile, Digital Promise says.

“It is dire” for Michigan to introduce the same systems, Curtis says.

More detailed information on the $100 million allocated for the Marshall Plan can be found by clicking here.