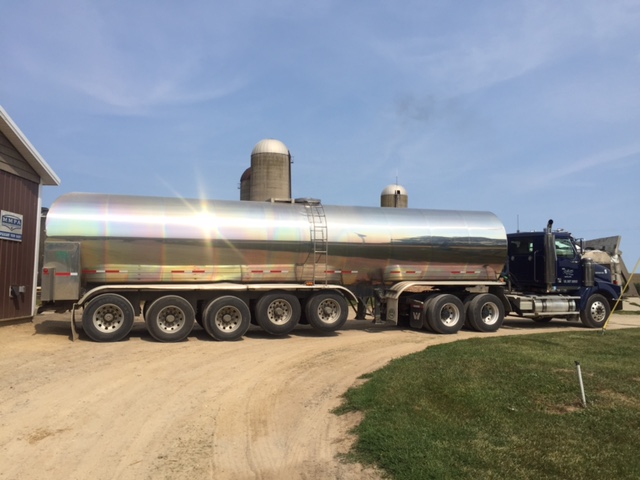 Michigan ranks fifth among the nation’s dairy producing states. Dairy farms contribute nearly $1.7 billion to our annual economy, yet little is known about our state’s 1,800 dairy farmers and the 425,000 cows that produce 10.9 billion pounds of milk sold annually.  This piece is part of a series of annual reports produced by TheHUB to help readers get an inside look at the lesser-known industries driving our economy and supporting our health and welfare.

It was a sparkling Monday morning, and the cows had already been milked once, at 7 a.m. The start of the next milking was underway, second of three total trips that the cows make into the milking parlor each day at Pleasant View Dairy Farm. The operation is tightly scheduled, highly scientific and one that the cows know like clockwork.

There’s a lot to learn when you’re a newcomer to dairy farming. That’s why the dairy council invites journalists, college students—like the group of 28 enrolled in Eastern Michigan University’s Dietetics program—and faculty members on expert-led dairy farm tours. Ours was headed by Jolene Griffin, Director of Industry Relations at the United Dairy Industry of Michigan. Jolene grew up on a dairy farm in Michigan and is understandably passionate about it.

When the bus finally pulled into Pleasant View, we were greeted by 200 acres of green—corn and fields—and cows beyond. Pleasant views indeed. The farm is owned by the Lewis family, Jennifer and Bruce at the helm, and has been in their hands for 76 years. They milk Holstein cows, the black and white variety, which are known for their high milk and somewhat lower butter fat production—3.6 to 3.7 percent butter fat for the latter.

Jennifer boarded the bus and gave us the rundown of the basics:  the fields, the herd, and the people who tend to them. A fair amount of education was in store for us. As merely a consumer of cheese, yogurt, and half and half, I admit I had a lot to learn.

Lewis was met by Dean Andres, the resident dairy nutritionist who comes to the farm twice a month to check the feed, make rations for the cows, and tend to other matters at hand. This is because, as Lewis explains, the feed needs to be formulated for the diet of the group they’re feeding—for calves, to grow the animal, or for cows, for milk production.

Our first stop:  The cornfield. A tractor is set out to take down the entire stalk of corn, which is then ground into cow feed—or, in tradesmen’s terms, corn silage—and fed to the herd. Previously, all I could picture were grains of corn, lovingly tossed by a farmer into grain buckets. How different feeding time is:  These cows practically receive meals made up of five-star ingredients, depending on the nutritionist’s careful analysis.

To find the best mix, Andres takes the corn silage—cut in the fall—and ships it to a lab, who examines its nutrient content, and sends the results back. Andres will then make adjustments to give the best mix of corn silage, haylage (hay), forage (a mix of grass and legumes), other grains,or soybean. Just like humans, cows too need a balanced diet. Each one of these silage, as well as others, are housed in an enormous barn on the property, which holds multiple stalls packed practically to the brim. Andres pulled out a variety, one at a time, discussing the benefits each brings to the animal.

As luck would have it, one pregnant cow was delivering twins the day of our visit. She had birthed one that morning, but another was about to come into the world. As we made our way to the pen where she stood, Andres explained that pregnant cows are fed wheat straw for a full 60 days before they’re due:  its fibrous content is good for what are called “dry cows,” or those not currently producing milk. Calves are kept with their mothers at first to receive colostrum—milk produced in the mammary glands with important antibodies—then moved to a pen in order to shield them from accidents that may occur (cows are heavy animals not prone to watch where they sit or lay ). Newborns are then given regular milk and weened for a total of 56 days.

To be led through a day in the life of a dairy cow is to have myths busted left and right: The product you buy in a jug and put in your grocery store cart is quite pure:  No human hands touch a cow’s milk from the time it leaves the udder until it hits your coffee cup or cereal bowl. All milk is antibiotic-free. And dairy cows are all female. Who knew?

Dr. Skinner, the Lewis’s veterinarian, comes out once a week and works with Andres. “We take very good care of our cows,” he says with pride. Dr. Skinner has worked with the Lewis family for many years, and has passed on his knowledge to the herdsmen, who work most closely with the herd. As he led our group back to the pen where the pregnant cow stood, we witnessed yet another baby:  She had given birth to calf number two. It was a sight to see.

The Lewis’s belong to a co-op, which means their milk gets picked up each day by a milk truck and shipped to a plant where it’s packaged for sale or processed into different dairy products. Kroger milk, Kraft cheese, and various butter companies are just some that use the cow’s milk from Pleasant View.

The last stop on our tour was the milking parlor—where the magic happens. Cows lead themselves here each morning, noon, and evening to be milked; if the herdsmen are behind schedule, the cows will let them know, or so says the lead herdsman who addressed our group. They look forward to it and will even come to the same spot they go to every day. The cows file in and are then milked for 5 to 7 minutes. The amount of milk produced per cow each time varies slightly, but comes in at approximately 40 pounds per milking, or about 4 gallons.

Jennifer Lewis ended the day by telling everyone gathered that the cows on her farm are happy there. It’s an operation of the highest order, from start to finish. One can see why cows are such peaceful animals. Remember that and be thankful the next time you pour yourself a tall, cold glass of milk.