By Jaishree Drepaul-Bruder on 07/20/2020Comments Below 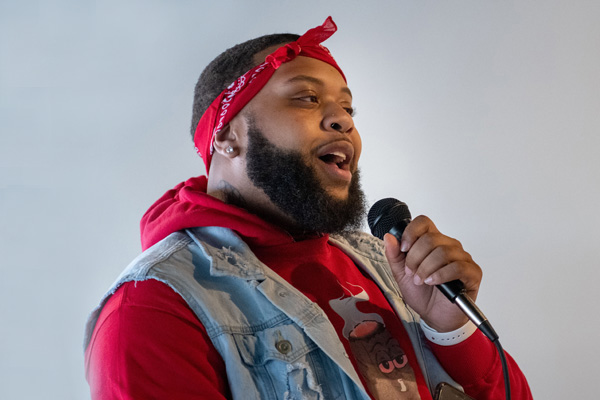 De’Air Lewis-Culbreath was watching television on May 26 when he saw something that horrified him. The news of George Flloyd’s death at the hands of police shook him to the core.

In that moment, the 24-year-old decided that he was going to take a stand against racial injustice, using his platform as the owner and CEO of DeeLux Styles LLC.

It took Lewis-Culbreath only five minutes to create a Black Lives Matter (BLM) shirt design that has been flying off the shelves.

“It just came to me. The words ‘I Can’t Breathe’, inside my [trademark] diamond and BLM on the sleeve,” he says.

He adds, “the shirt was so simple, but spoke volumes.”

It didn’t take long for Lewis-Culbreath to see evidence that indeed his design had struck a chord with people in his hometown of Flint. He put the shirt online and woke up to 140 orders within the first 24 hours. To date just under 400 have been sold.

High demand — and selling out of merchandise — is not foreign to Lewis-Culbreath. Since he started his line in October 2018, the brand has been growing in popularity by leaps and bounds. High quality clothing and unfailing customer service are just two things that keep customers loyal.

“My merch always sells out so fast. People pre-order outfits and shirts before I can even make them, before they even see what they’re paying for,” Lewis-Culbreath says. “My supporters trust me that much, and I never disappoint.”

The BLM shirt is just one item of a host of other offerings that Lewis-Culbreath sells. The one-man show started the luxury streetwear brand out of his mother’s basement, pushing a single shirt. He still chooses to operate from that same location, but has grown the brand to be a dominant force in the local fashion scene. Today he sells entire outfits. Jean jackets, hoodies, crewnecks, shirt and short sets, jogging suits and custom orders are just some of his staple items.

It’s Lewis-Culbreath’s intention that when anyone puts on DeeLux Styles clothing they put on a sense of joy, luxury and untouchability.

“I expect the ladies with low self-esteem to feel like they’re the prettiest in the world,” he shares. “And I want the fellas to know nobody else will have the outfit they have on and that’s where the customs come in.”

The Deelux brand has resonated with people from all walks of life. Senior groups have purchased shirts for their events, people gift the shirts to loved ones on their birthdays and they have been spotted in family photos.

It’s because customers know that he can bring their vision to life, Lewis-Culbreath says. He reports that within weeks of launching his clothing brand his email was flooded with opportunities to participate in fashion shows, vendor events and media interviews. He’s also been involved in 10 fashion shows. Being a part of Jeremy Cornelius’  BLACK OUT show twice, and Tracy Palmer’s Fight Against Bullying Show are just two recent career highlights.

Due to the COVID-19 pandemic, a lot of the events that were on Lewis-Culbreath’s radar this year have been cancelled or postponed. He has, however, been keeping a positive attitude that he is committed to passing on to his customers.

“During COVID business is hard because supplies such as shirts, vinyl and masks are limited and it’s even harder to explain to customers that you may not have what they want,” he explains. He adds, however, that he “tries to please everyone and always make it happen.”

Just as important to Lewis-Culbreath is cultivating his own happiness. His vision stretches far beyond the challenges of COVID-19. In five years he expects to be at the height of his career with a storefront and his clothing flaunted as a celebrity favorite.

In the more immediate future Lewis-Culbreath is putting some final flourishes on a community event that was in the works pre-pandemic. He is keeping the details under wraps for now. But, he teases that a number of Flint movers and shakers are helping him with the “epic” event that is now rescheduled for the beginning of 2021.

He’s also happy to announce that he’s found a manufacturer to help him as business continues to boom.

“Once I see the response and feedback from customers, it may be safe to say that I finally have the help that I need,” he says. “I will still do custom shirts from home because I have the equipment. But, as far as outfits, and things that are going to be embroidered, I’ll use my manufacturer.”

Remaining a one-man show is something that Lewis-Culbreath anticipates. Being able to single-handedly decide on his work hours and prices are just some of the plusses that he relishes.

“I handle every single item that has been sold and is currently being sold right now,” he says. “I can honestly say that I put my blood, sweat and tears into my craft in order to perfect it.”

He adds that the phrase diamonds don’t break, they are forever, inspires him to keep on pursuing greatness. “Nobody can break you, but you. You are in control,” he says. “This is also why I chose a diamond to represent my brand. I want my brand to be forever.”

Editor’s Note: To find out more about De’Air Lewis and DeeLux Styles streetwear brand check out his Facebook, and Instagram.pages