Leading (and eating) by example 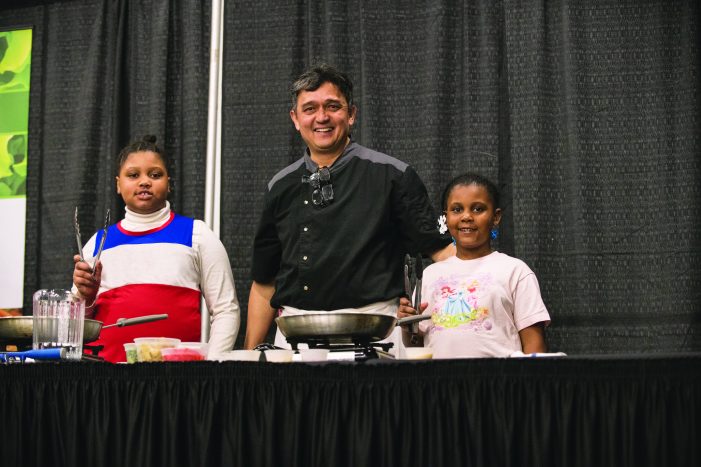 Luis Fernandes remembers the joys of spending time in his mother’s kitchen.

Growing up in Macau, south of Hong Kong, he fondly remembers markets with fresh foods and spices that regularly found their way onto his family’s dinner plates.

It was through his mother’s tutelage and encouragement that he developed a lifelong culinary passion, resulting in his current co-ownership of Redwood Steakhouse and Brewery in Flint. A formally trained chef, Fernandes says more parents can give their children the confidence and skills to make the kitchen feel like a less foreign place.

“One of the things I feel is important with kids now is to get them involved with the preparation process,” he says.  “It also starts out with giving them the chance to try out some things they’ve never tried before.”

Fernandes was a featured chef at Savor the Flavor of Flint in January, demonstrating how children can make tortellini pasta during the event’s “Kids Cook” segment. Held at Dort Event Center and presented by the Michigan Fitness Foundation, TheHUB Flint and Michigan Department of Health and Human Services, Savor the Flavor showcased local recipes from home cooks and restaurant owners, while emphasizing healthy, delicious alternatives to traditional dishes.

While the culture in China provided him with a more traditional, daily-marketing approach to grocery shopping, including live chickens that would be freshly butchered for customers, Fernandes says parents in Flint’s homes should strategically introduce children to cooking from scratch with whole, unprocessed food

Success starts with identifying the types of food children prefer and enjoy when dining out, or when given options at school and other events. For example, Fernandes says, a child who favors Mexican cuisine might be more eager to eat vegetables accented with taco seasoning.

“For me, one of the most important things is to make it simple, but also to get them to think about the freshness of the product,” he says.

The path to developing a young palate is identifying favorite tastes, especially those associated with natural spices and herbs, Fernandes says. There is no easier way to make children curious about meal preparation than putting something delicious on their plates.

“The thing with kids is they like certain flavors,” he says.

His in-laws are Michigan hunters whose children enjoy traditional kids’ fare like Sloppy Joe sandwiches. What healthier alternative to an All-American, kid-approved favorite like ground beef, fried and smothered in salty, tomato-based sauce, might there be?

Fernandes’ family added venison, a lean deer meat, to the Sloppy Joe recipe and the children were just as satisfied. “Masking” traditional dishes children enjoy with less-fattening, lower-carbohydrate ingredients can make them healthier and spark their interest in experimenting, says the chef.

Brandon Willingham, who assisted Fernandes on stage at Savor the Flavor of Flint, says making food enjoyable and interesting to children has long-term benefits.

“When kids have the opportunity to learn how to cook and meal prep they’re putting themselves into position to make adjustments to their health and develop into healthy adults,” he says.

Outlets like Gordon Food Service, which caters to the Flint area, offer good grocery options for shopping that will help families stock their kitchens with foods that are both nutritious and kid-friendly. Many recipes can be “easily” made in 15 or 20 minutes, Fernandes adds.

Even kids who aren’t particularly interested in learning their way around the kitchen can be influenced by exposure to cooking competitions and similar attractions.

Editor’s Note: See More Coverage of Savor the Flavor of Flint and find healthy recipes at the Michigan Fitness Foundation’s MI Harvest of the Month site.

Lead Image: Chef Luis Fernandes, co-owner of Redwood Steakhouse and Brewery, says making meals with children can give them a greater appreciation of health and nutrition. Photo by Danen Williams