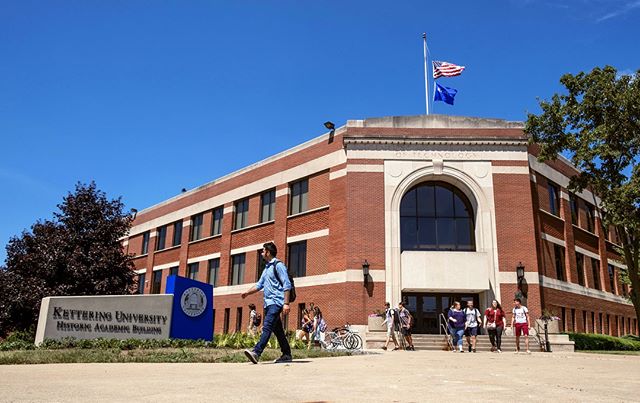 A walk through the University Avenue Corridor (UAC) today looks much different than it did five years ago. With Kettering University leading the way, the neighborhood residents and businesses are making a positive change and taking pride in their communities.

Kettering has been an integral part of the Flint community for nearly a century and will celebrate its 100th anniversary in 2019. While it has a history of excelling as an institution of higher learning, in recent years it has added an additional pillar of success, Community Vitality. That pillar focuses on making the university, its students, faculty, staff and alumni active partners and leaders in efforts to create a vibrant and economically thriving city.

“We have invested $50 million or so already,” says Tom Wyatt, director of neighborhoods and community services at Kettering, a position created after Dr. Robert McMahan became president in 2011.

“We are forecasting a further investment of a couple hundred million in the next three years between institutions investing, campus expansion, amenities, student housing, rehab and new construction,” he says. “We didn’t even add the river restoration to that.”

It began in 2012 when Kettering organized the three neighborhoods in the UAC – Carriage Town, Glendale Hills, and Mott Park – and invited businesses and community organizations operating on the avenue to form the University Avenue Corridor Coalition (UACC). The UACC began with 20 in attendance and has since increased participation by 250 percent. The UACC continues to meet monthly.

The UACC, with Kettering University acting as the fiduciary, received a $1 million community engagement grant from the Department of Justice in 2014. The grant, along with other partnerships, focused on crime prevention and blight elimination along the corridor.

The organization is making a big difference.

Between 2012 and 2017, there was a 78 percent decrease in poor, substandard and blighted properties because of Kettering’s investment and the combined resources of more than 80 stakeholders along University Avenue, according to a five-year report prepared by Wyatt.

The work has also been instrumental in reducing crime.

In September of 2014, Kettering received a $150,000 Crime Prevention Through Environmental Design (CPTED) grant from the Center for Disease Control and Prevention in partnership with the University of Michigan’s Youth Violence Prevention Center.

With the dollars, Kettering was able to fund research to identify crime hot spots and use its resources to strategically act to change those spaces by adding such things as lighting and motion sensors and cleaning up blight.

The number one crime hot spot was a corner party store located at University and Grand Traverse. Prior to Kettering intervening, the location reported high numbers of prostitution, drug activity and stolen goods.

Kettering bought out the business, tore down the original structure and constructed a new building. A local Jimmy John’s owner noticed the positive changes and decided to move in. Shortly after, Little Caesars moved in next door.

“The hot spot has essentially disappeared,” says Wyatt. “There was a lot of drug and sex trade and other close areas where people were victimized to get resources, money, or possessions to trade for those services. People didn’t feel safe around here. They wouldn’t get gas at the station across the street. When that crime all started to go away people felt safer and now it is completely different.”

Kettering also began changing the message it was sending to the community. The fences around the dorms had barbed wire on them. Those were taken down.

“Instead of building up fences to protect our students we have to take down the walls and fences and get out in the community,” says Jack Stock, director of external relations in University Advancement. “We need to find out from them and learn what we can do as a university to impact it in a positive way. Then we were taking on the responsibility to create change.”

In 2014 Kettering unveiled its Campus Master Plan, which will make the campus more open and more seamlessly connected with the surrounding community and the assets in the city. This includes re-orienting the university to face the Flint River, downtown Flint and the new main campus entry/gateway on Chevrolet Avenue. The goal is to “positively contribute to the revitalization of Flint by redeveloping industrial brownfields, creating new green space and walking paths, and enhancing natural features like the Flint River,” the university says.

A space across the street from the main hub of campus was one of the first locations to change.

Sitting at the corner of University and Chevrolet Avenues was a former convenience store that had been neglected. The location was purchased by Kettering and changed into a Flint mini-police station and Einstein Bros. Bagels. The project was completed in 2013.

Still there was the speeding traffic on Grand Traverse. That needed to be fixed, so it was given a road diet. The number of lanes was reduced from four to two to slow traffic. The reduced lanes were repurposed into a center turn lane, street parking on the east side of the road and a bike lane on the west.

“It has really slowed traffic for pedestrians and those using the Flint River Trail,” says Wyatt. “The idea is to encourage private investments. A lot of this area can really be queued up for private development or housing developments, but they don’t work in areas where people are traveling at high speeds.”

“Everything Kettering has done has impacted me here, and no one is happier than I am for what they and their partners have done,” says Ken Van Wagoner, owner of The Good Beans Cafe, which has been on Grand Traverse for 18 years. “The street diet has been really incredible for us. The parking up front, even though it is only five spaces, just the idea of it has been really nice. It is also supposed to slow traffic down and it has done that. It used to be four lanes and it was a race track. It has at least somewhat slowed that down and I am happy about that.”

Other Kettering projects have made a huge difference.

In 2013, the university took ownership of 11,000-seat Atwood Stadium and some surrounding properties from the City of Flint, which could not afford the maintenance and operation costs. Opened in 1929, it was falling into disrepair and a target for vandalism.

“This was a mess, and we just intentionally said that we have to have it. We don’t even have a football team,” jokes Stock, “Why are we doing this? Because it is the right thing for the community. It is an example of the attitude and culture that we want on our campus. We are going to do whatever we can, and now our students get to use this, and our community gets to use this.”

Local youth and intramural sports teams use the field. It is also used for community events such as the Fourth of July concert by the Flint Symphony Orchestra, Relay for Life events and the 80s in the Hole event that is becoming an annual community favorite.

The university took over the abandoned Mott Park Golf Course, at 2701 Nolen Dr., in 2017 and converted it into the Mott Park Disc Golf Course.

“We went out and asked the community what they wanted, and they came up with multiple ideas, including a disc golf course, enhanced trails, a nature preserve, kayaking … and now it has come true,” says Stock. “This is the first disc golf course in the city of Flint and it gets used constantly.”

Kettering worked with the Flint Town Flyers, the local disc golf league, to put in 18 holes with cement pads. Kettering students and community members volunteered for a big work day to get it completed.

The course has been cleaned out, with continued efforts at removing invasive species and dead trees to return it to a usable park. It is home to a monarch butterfly preserve, and the old clubhouse that is now vacant will be repurposed, as well.

“It is really a great idea because a lot of cities are starting to see how golf courses are a fiscal liability,” says Wyatt, “They are opting to change them into more passive uses like this because the return on investment is just incredibly low.”

Additional positive changes in the area are happening.

Kettering has also been involved in reopening the Kettering archives at Factory One and in the maker’s space at Factory Two. Every student at Kettering is given a membership to use the facility.

“One of the most impressive things about Flint is the passion of the people,” says McMahon in videos about the UACC. “As a university we have engaged in the community – actively.”

For more information about the UACC visit https://www.kettering.edu/uacc or attend a monthly meeting.