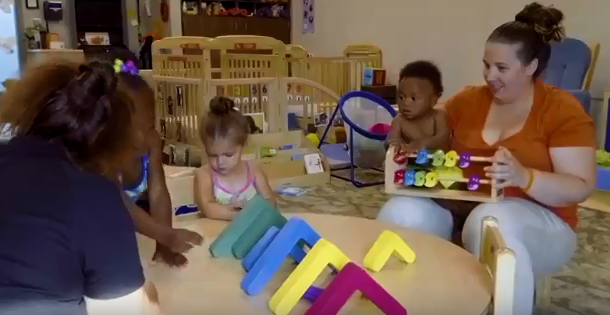 When Dr. Elizabeth Jordan she got on the plane she had no idea her seatmate would help her change the lives of young children attending Educare Flint.

The early childhood consultant for the Genesee Intermediate School District sat next to Dr. Christine Wallace, vice president for Kettering Global Campus. As they chatted, Jordan shared a big problem with her. Educare Flint was having difficulty finding a variety of toys for its students.

The school, which services children from six weeks to five years old, is located just down the street from Kettering University.

Wallace had a solution. Kettering students could make the toys.

“For 100 years our university has been one of the nation’s premier engineering science and business universities – producing, literally, a century’s worth of entrepreneurs and innovators so our students would jump right in and look at what was essentially a problem and come up with a solution makes me extremely proud – but I am not at all surprised,” says Dr. Robert K. McMahan, Jr., president of Kettering University. “We prepare all of our students for the future, we teach them to engage and collaborate in a way no other university does. I think this engagement is a perfect example of that.”

Students in four sections taking classes in the school’s Interdisciplinary Design and Manufacturing Department were up to the challenge.

Those toys will give the young students a head start in school.

Educational toys help children develop problem solving skills and understand how things work, as well as teach them about sharing and conflict resolution, according to Educational Playcare. The toys also help them develop their fine and gross motor skills and spark their creativity and imagination.

The toys were a big hit and kept the students’ attention.

“The teachers tell me they see the children playing with them longer than with anything else we give them,” says Jordan. “There is one they called the tree that turns into a fish. It’s open-ended. It uses different angles. It is a beautiful toy. It is sturdy and the children love it.”

The Kettering students did more than just make the toys. They got down and played with the kids.

The students also learned a few things about young children. They’re stronger than you think and can break toys. That’s knowledge that may serve them well in the future.