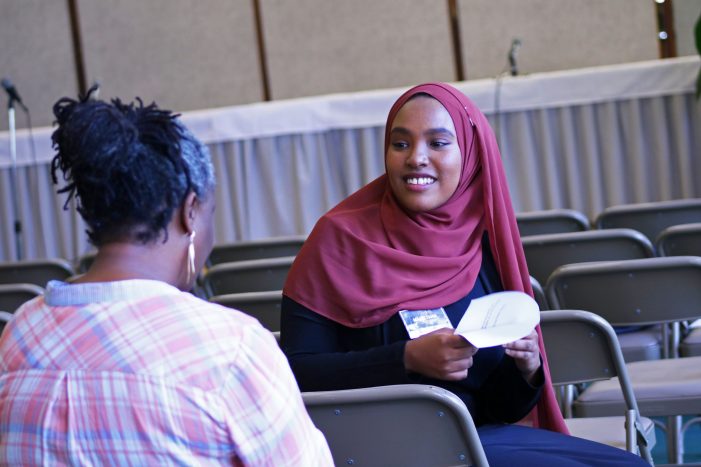 How much harder could it be to navigate recovery from the water crisis if you don’t speak English? Local groups aim to bring the immigrant population into a larger conversation about ongoing challenges to re-stabilizing Flint.

“Flint Water Crisis: Invisible Immigrants,” a town meeting, was recently organized at the Flint Public Library. Conversations about access to resources, such as bottled water and filters, has been ongoing, but members of the Arab American Heritage Council (AAHC), Genesee County Hispanic Latino Collaborative (GCHLC), and International Center of Greater Flint (ICGF) say segments of the population were never included.

Funded by Freshwater Future, “Invisible Immigrants” sought to shed light on the water emergency’s impact on undocumented immigrants, refugees and others, while providing knowledge to local non-profits, community leaders, officials and activists.

Flint’s population is about 6 percent Latino and there are about 40 Arab American families, with nearly 1,000 undocumented immigrants from several countries, according to AAHC research. Inability to read and comprehend English, or lack of legal identification and Social Security Numbers, have hindered participation of some residents in the water recovery process.

“Our goal is to uplift and center the narratives of refugees, asylum-seekers and undocumented immigrants, and have a group of experts, researchers, or people doing the groundwork in the community, talk about what barriers there are, and why it is so difficult to reach those communities,” Eltahir says.

Phyllis Sykes, another organizer of “Invisible Immigrants” and co-founder of the International Center of Greater Flint, says the Center was established to help integrate isolated residents to the city and available outreach initiatives.

“The water crisis just happens to be a situation where the exclusion and isolation of the community has been highlighted,” Sykes says. “The center was created to integrate and engage that community so that this doesn’t happen again, and so that they are included in the overall conversation in regards to the community.”

Lifting invisibility from the immigrant population might draw criticism from some, but Juani Olivares, president and CEO of Genesee County Hispanic Latino Collaborative counters that immigration, legal or otherwise, is not consent to a lesser quality of life.

“They are human beings just like you and I,” Olivares says. “Just because they may not have a legal status does not mean that they don’t qualify, or don’t deserve water rights or any other rights.

“They pay taxes like everyone else.  The only difference is that they came here illegally, in hope of a better life. They definitely were not asking to be poisoned. I think the least that we could do is help them.”

Devin Jones, executive director for the AAHC, emphasizes that the dialogue about including immigrant residents must continue.

“Hopefully, in the future, when the state or the city has conversations about the water crisis, immigrants and undocumented individuals are a consideration,” Jones says, “not that we have to create our own solutions, but that we are included in the conversation already.”