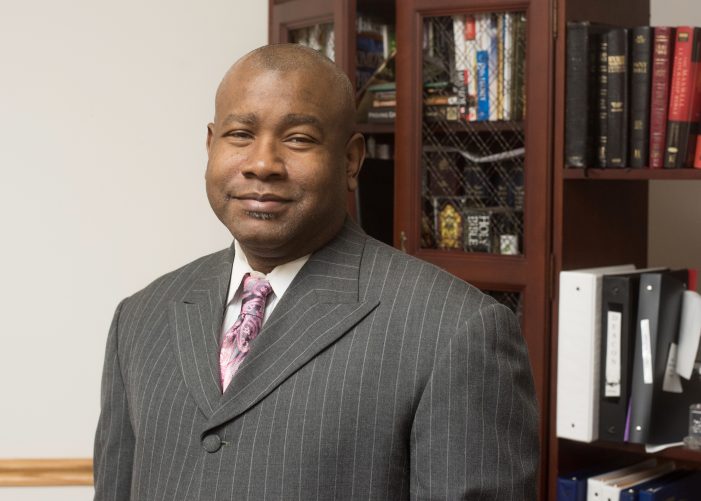 When his uncle, Bishop Odis A. Floyd, appointed him interim pastor of the New Jerusalem Full Gospel Baptist Church in June 2011 it set in motion a vibrant and passionate viewpoint to the church.

Shortly after Floyd died, Sanders was elected senior pastor of the church in December 2011, and has since served as a community leader in Flint and the shepherd of his flock, bringing a fresh outlook on ministry to the city and offering people information and innovation to survive contemporary social issues and challenges in their daily lives.

He says he believes in assisting people to be self-sufficient, and to do that they must be fed more than spiritual food. For example, 18 people currently are completing a nine-week entrepreneurship training program with tips and tools to raise their credit scores, write business plans and personal vision statements.

Realizing the need to address the lack of access to fresh produce in the food desert, this spring he’s resuming operations for the Flint Pop Up Market, which served 2,500 people from April through November last year. By 2018, he plans for the church to open its own grocery store. While the church still distributes bottled water weekly, Sanders has plans for a series of roundtable community discussions on next steps to handle emotional problems in the aftermath of the city’s water crisis. Those will kick off right after Easter Sunday, he says.

“Flint is more than a blighted city. There are people here who really care, and they just don’t quit. It will return to another glory. It’s going to be grander than its former glory.” -Pastor Patrick Wayne Sanders, New Jerusalem Full Gospel Baptist Church

“I have to take Jesus off the page and he has to become the carpenter. He can’t just stay on the cross,” Sanders says. “I need Jesus to fix the plumbing, fix the family problems. We take the personal hands-on approach, not the pie in the sky perspective that you don’t get to see him until you die. I need to get my baby off crack.”

“I understand what it is for my baby boomers who still love Amazing Grace and sit at a dinner table to eat in the evenings,” he says. “I’m a bridge, and I think of myself as a bridge of the generations. We’re getting ready to start a program for millennials called the Millennial Family. It’s going to attract and engage them, make them more aware and bring some things to the table for them. But it will have to be fast-paced, interactive with music and videos and built around social media.

Sanders also works to engage the congregation’s children and adults with a 30-member praise dance team.

“It was a need we saw for our kids,” he says. Praise is more than just verbal. It’s physical expression and at the end of the day, I’m Black. I’m African American. Expression for us is dance and movement. If you can’t do that in the church, you are going to be in trouble. It’s an outlet of expression just like rap and spoken word. It’s a great tool for ministry for us.”

So is the church’s award-winning gospel choir, under the direction of Jeffrey LaValley, has won the Soul Train Award and nominated for a Grammy.

While he hails from Shreveport, La., where he once pastored, he had adopted Flint as his hometown. Today, he says he can’t see himself living anywhere else.

“Flint is a great city and this city is far more than a water crisis,” says Sanders, who will celebrate 29 years of marriage in April to his wife, Ann H. Sanders, and is the father of four children, Kekoca Sanders, 31, Samantha Cardwell, 30, ShabrikaDeannHilson Sanders, 20, and his namesake, Patrick Wayne Sanders II, 26, who also is a minister of the Rising Star Baptist Church.

“Flint is more than a blighted city. There are people here who really care, and they just don’t quit. It will return to another glory. It’s going to be grander than its former glory.

To this end, he says, Flint has to see itself as a family.

“Being a pastor is good. I’m a father and I’m married. I do all of this, and all I want is for people to do better and to know better,” he says. “We don’t have to wait on Washington, D.C. or Lansing.” These are our streets. I came from the era when I had to be in the house when the street lights came on. We are negating the way we came up when everybody was my mom, everybody was my grand mom. The way to fix Flint is to put it back. We need to bring back some of those old principles.

“Let’s put back what’s missing: Family, community. We’re all from the same system and we don’t do it without each other.”