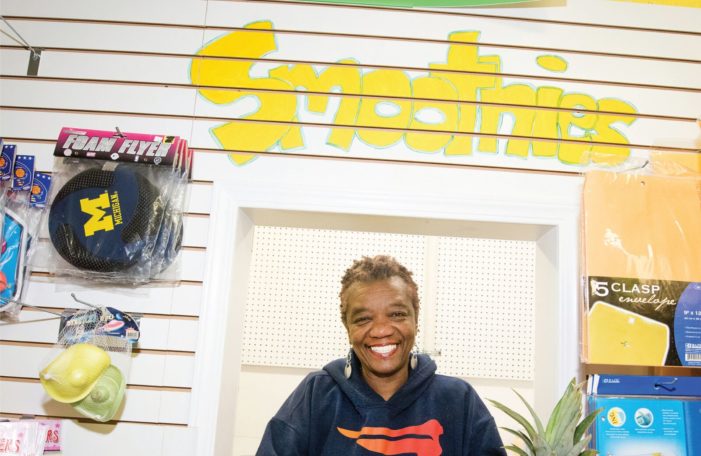 After a 38-year career in journalism that took her around the world, Kathy Jackson retired to her hometown of Flint and opened up the Healthy Dollar Store.  After a decade in business and establishing a reputation in the city, she, like so many small business owners, had to close her store because of COVID-19.

With no business to go to everyday, and following the lockdown orders, Jackson is bouncing off the wall.  Her former life as a reporter still strong, she is still holding back her desire to be out among the people.

Part of the reason she enjoyed the business she started was it allowed her to speak to all different types of people. In her role as an auto-journalist, she says she spoke mainly to people who were middle-class and up. This gives her a new perspective.

Her family told her of economic problems in Flint, but Jackson wanted to talk to the people and be a part of the city’s return, so she opened the store. She still feels that way.

Unlike most business that took an unscheduled break in sales, Jackson did so voluntarily.  Since she mostly sold food, the mandate to close likely would not have affected her.  However, the lack of daily foot traffic that made up most of her sales would have taken a toll.

Downtown events in the summer usually provides a decent amount of income each year.  Now, even if those events still happen, she plans to remain closed on those days because she doesn’t expect much foot traffic.

The Health Dollar Store is in a cross-section near Kettering University, the University of Michigan-Flint and Michigan State University’s Flint campus, which would normally be a great place to attract customers.  With colleges unsure of how students will be taught in the future, that is also a potential hit to her revenue stream.

Now, she has begun to think about what to do once she reopens her doors to the public.

Fortunately, there was not too much of a problem for Jackson.  Owning the building where her store is located has kept her from worrying about rent.

With no employees, she didn’t feel a need to take advantage of the loans offered.  She wanted them to go to those who were more in need.

Once the store is up and running again, Jackson doesn’t expect too much change in day-today operations, other than requiring masks, making sure patrons are at least six feet apart, and other common-sense measures.

What that future holds for Jackson is a question.

When the Healthy Dollar Store opened, she only planned to keep the business for 10 years, and that time has come.

With COVID-10 acting as catalyst, Jackson will start selling off her inventory and closing the store for the last time sooner than later.

She is looking forward to a new role as landlady, offering her space to some new business.

Leaving her business will not end of Jackson’s involvement in the community.  She currently a member at large on the board of trustees for the Flint Public Library and is looking for other places to get involved and make a difference.

Through it all, Jackson’s view on Flint’s post-pandemic future remains optimistic.  She says people are still supportive of small businesses and taking the proper precautions when they go out.

Whatever the final state of small business when the pandemic ends, Flint’s resilience is not to be underestimated, and Jackson is confident the city will continue its economic growth.

COVID-19’s new normal means a shakeup for Flint, but it may mean a chance to turn over a new chapter for many.