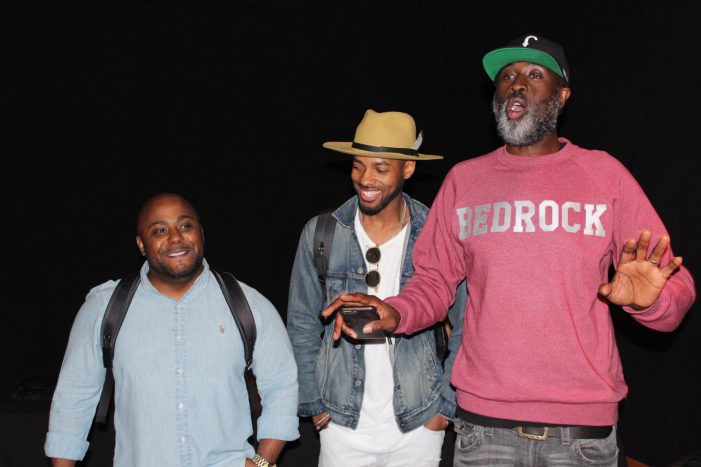 It was the ultimate litmus test. On stage five men responded to rapid-fire questions from a largely women-dominated crowd attending “The Guy Code” at the Sloan Museum Saturday.

The aim of the effort organized by Girlz Galore was to answer the age-old question: What are they thinking?

If only women knew.

“Although there always should be, and often is, equality in relationships, it seldom is reflected in a 50-50 split,” says panelist Isaiah Oliver, president of the Community Foundation of Greater Flint.  “Often it might look more uneven. There are times that I may give nearly everything I have at work, and not have as much left over for myself or my family. And, certainly, there are other times when my family absolutely should and does come first.

“It’s a balance that we all need to better understand.”

A father to three girls, Oliver is surrounded by women at home and leads a largely female staff at work.  He urges both men and women to look at their overall contributions to their relationships with one another.

“You wake up and you are already doing too much,” he says.

Carlos Conner, a music manager and co-founder of Bedrock Apparel, says women will get more from the men in their lives when they understand men’s commitment to goals.

“We gotta do what we gotta do just to survive,” Conner says.

“We’ve got to be vulnerable to, and protect, one another,” he says.

Panelists agreed that women who want men to be open and honest with them have to protect and hold that vulnerability sacred.

They also agreed that pushing men for certain reactions can be a good or a bad thing, depending on the circumstances and the individual. If a woman knows and understands a man well she can push and encourage him to accomplish more than he would on his own, Conner says: “Know your man.”

Women who sit and wonder just what it might take to motivate their man may have chosen the wrong guy, to begin with, says panelist Rev. Kevin Galloway, of Ebenezer Ministries. Men are naturally motivated when they are with the right mate, he says.

“If you have to constantly motivate someone you need to make the decision whether you are in the right relationship,” he adds.

From women, above all, what men want is recognition of their good works and for women to share in their success.

Mistakes matter, too. Panelists agreed that both men and women should share more life lessons with others, particularly their kids.

The greatest gift we can give our children is to be open and honest,” says Oliver.

Men share with each other in barbershops, bars and on the ball court, he adds.

“We do share with and support each other, but it’s a more casual process.”

But one of the most significant ways men share is through their actions, often measuring each others’ accomplishments, says Galloway. He often gets inspiration from seeing other men succeed.

Panelists say there’s still a challenge, however, in closing the gap of education between local men and in building better relationships with those outside their various circles. But “The Guy Code” ultimately revealed ideas about how to eliminate miscommunication and reduce disengagement, by first recognizing the need.

“We must expand our influence beyond our personal relationships into the greater community for the betterment of Flint,” says Galloway.