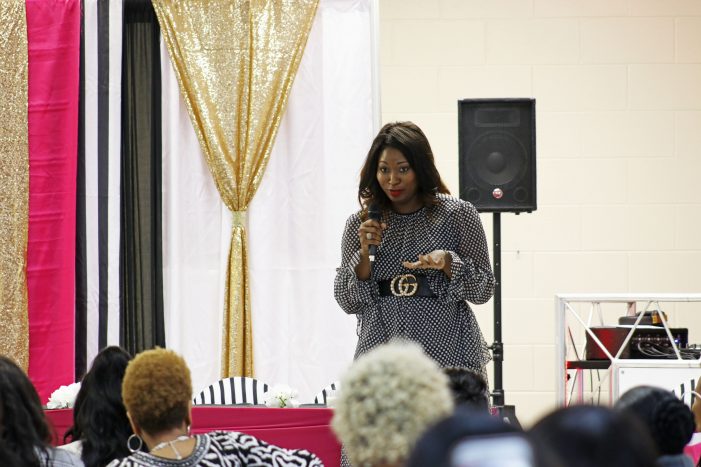 The energy was hard to describe. The networking was at fever pitch and the camaraderie so thick, it could be cut with a knife.

No, it wasn’t the a summit of world leaders, but of local ones, gathered at the First Trinity Missionary Baptist Church for the GoGetHER Conference, the first of its kind in Flint. The day brought together women from around the area and beyond there to learn how to grow their business, to start one, and to be inspired by speakers, a panel of experts, and two dynamic women leading the charge.

Those two women are Tachina Mack and Catrina Tillman, co-founders of GoGetHER. They met over Instagram ten months ago – proof positive of the reach, and power, of social media – and found that they shared the same vision – empowering women. Tillman told Mack her goal was to hold a conference that would really give back and help women get ahead. They decided two great minds were better than one and the planning began.

Tillman, who was raised in Oak Park, pulled on her many connections throughout the Detroit area. Mack hails from Atlanta and tapped into her community there. Instagram also played a role in the women locating and identifying a few of the panelists.

“We were very specific in who we selected for our panel,” says Tillman. “We wanted to make sure our attendees walked away with real life tools and advice they could apply to their journey to success.”

The day couldn’t have turned out better for Tillman and Mack. It was “just mind-blowing” says Tillman when asked amidst smiling faces and bubbly conversations.

The two missed nothing when it came to set-up and programming: A step-and-repeat had attendees enthusiastically posing and snapping photos throughout the day. First Trinity’s large meeting hall was transformed by Alexandra’s Creative Planning and Marketplace, whose owner, Alexandra Moore, was also in attendance.

The sharp black and white draping the tables and chairs was offset with shiny pink swathes of fabric, and gift bags perched atop held items from local businesses, some of whom were sponsors, such as Flagstar Bank, Gifted Dezyns Graphics and Printing, and She Strong International.

Vendors, such as Sista Girl, a greeting card company owned by Rhonda Willingham, and Up to Date Purses, presided over by Victoria Conner, lined the halls, greeting participants as they streamed in. It was one of the ways Tillman and Mack capitalized on the reason they were there – to support women’s business and their dreams.

Opening remarks by Tillman and Mack kicked off a day they wanted to be full of “business, branding, financing and funding, and passion – for entrepreneurs, leaders, dreamers.”

Tillman addressed the crowd with not only her vision but her tenacity. A former advertising executive at both GM Planworks and Team Detroit, Tillman is now a First Lady alongside husband, Ezra L. Tillman, Jr., pastor of First Trinity Missionary Baptist Church calling her role as wife, mother of four boys “mom-in-chief.” As a woman of strong faith, Tillman also founded S.H.E. Ministries (S.H.E. standing for Spiritual, Humble, and Elegant), an organization that seeks to help women live out their God-given purpose with excellence.

“There will be times when you’re trying to make your vision come true, and you will be tired, and you won’t feel like working at it. You have to press your way through,” she says. “We have the same 24 hours as Beyoncé, the same as Oprah, the same as Bill Gates, but it depends on what you do with it.”

Tillman is well aware of the role that faith plays in every endeavor in life, especially business.

“You have to be prayerful – in the beginning, in the middle, in the end, throughout the whole process,” she says. “Because God is a strategic God, and very focused on who he connects you with and how you become connected.”

Tillman encouraged the crowd to just do it – whatever their goals are – to use their time wisely and, most of all, to surround themselves with like-minded people who can support their initiatives as they build and grow.

Mack captivated the crowd with her own tale of immense struggle, raised in a troubled household, one which she planned to run away from at a very early age.

“I used to go around looking in those apartment advertisement booklets – remember those? I looked in them to find my dream apartment,” she says.

Mack was home schooled and says she had graduated at 16, but came to find that her mother hadn’t actually turned in the proper paperwork to the state showing Mack’s finished work, burning it instead. Mack had nothing to show for her years of hard work.

Not long after that, she moved out and started working. It was through the encouragement of friends and mentors that she attended college and set on her entrepreneurial path. She is now the CEO and founder of Gifted Dezyns Graphics and Printing and TRM Enterprises, along with being a business coach, motivational speaker, inspirational blogger, creator of “She’s the Boss” Collection, and author of Don’t Skip Any Steps: My Journey to Redemption.

But it was Tineesha Cherry, author, poet, leadership trainer, and motivational speaker, who riveted the conference when she took the stage, delivering her story in the form of a powerful poem laced with postulations and statements so strong the walls practically shook. (Cherry is also the assistant director, Office of Field Operations, in the Detroit field office with the U.S. Customs and Border Protection, where she has worked for 23 years.)

Cherry riffed on being born to a mother addicted to heroin, with heroin in her system. Her earliest childhood memory is one of living in an abandoned building with no food and the only water they could drink being captured in empty vegetable cans placed on the window sill.

A product of multiple foster homes and the adoption system, Cherry is proof that one can endure unbelievable hardship and come out on the other side.

Cherry lectures to groups all over the world from Texas to Dubai and runs the nonprofit She Strong International. Like most of the women heading up the conference is a wife and mother.

“People say to me, ‘Tinesha, you play all of those roles and, you are a wife and mother? Don’t you get tired?’ I say no. I am about my business every single day,” she says.

Cherry reminds the crowd just how important it is that they be present every day too.

“You’d better show up for you,” she says. “You better learn to be your own your own superhero.”

After a lunch catered by Flint’s own Chef Telly, the GoGet Her panel took the stage to speak from the heart about all that they have learned during their careers and to pass along valuable advice to the audience.

Questions from Tillman and Mack spurred the conversation, such as “How did you take the word no and change it to a yes?” Tatum was the first to answer.

“It can only be a ‘no’ for now. At the end of the day, they are going to say yes to the next person. Why not have it be you?”

Tatum told the story of her own climb to success. After working in a doctor’s office for years, she was let go for reasons beyond her control. It seemed, though, like a blessing in disguise as it was the push she needed to go full force with the business idea that had been brewing for a while.

Naturalicious’s Gwen Jimmere recounted how she made presentations to retail outlets that she was courting to carry her hair care products.

“I showed them what was in it for them,” she says of her highly crafted approach. Jimmere made one set of screenshots of women complaining about a problem that she could solve with her products and then made another set of women raving about how the products had solved their care woes.

Tillman and Mack’s question, “How do you build your business?” got to the heart of the matter.

“Talk to everyone. Constantly be a moving, walking billboard,” says Gipson.

Mack offered the most basic advice of all. Do your homework.

“Figure out who your client is, and do your research. Set yourself apart from your competitor. Know your business and what makes it great,” she says.

Knowing yourself, and having the courage to take the leap, seemed to be the theme of the day.

“After all, a dream without action is nothing but sleep,” says Mack.

Tillman and Mack thought it would be fitting to honor one woman who has shown outstanding leadership in the City of Flint. To that end, TheHUB Flint’s own social media guru Kala Wilburn was given the 2018 GoGetHER Award for her fearless work in the community. Wilburn started Vehicle City Fashion Week, the Fashion Against Violence campaign after the death of her brother to gun violence, and is the designer behind the clothing line Fannie Lucille.

For more information on, visit www.GoGetHERconference.com or visit their facebook page at www.facebook.com/GoGetHERConference. Tillman’s site www.sheministries.net

GoGetHER conference: When a room full of women gather, anything is possible added by Cindi Cook on 05/26/2018
View all posts by Cindi Cook →