Forward Together asks: What would it take (for you) to prosper in Flint and Genesee County? 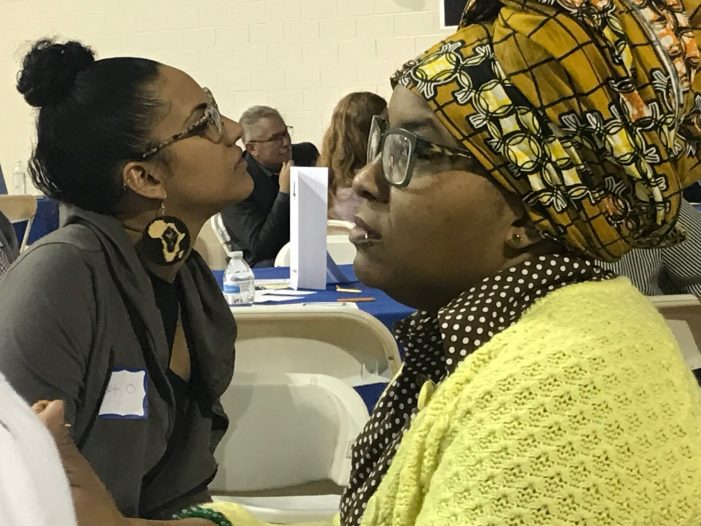 Our region’s next move may prove its most important one, according to Forward Together partners, who want not just some but as many people as possible to benefit in future job and wealth creation throughout the region.

It’s an unprecedented thought and effort, according to organizers, who say the initiative represents the first time Genesee County, the city of Flint and the Flint & Genesee Chamber of Commerce have ever endeavored to collaborate on an economic development plan.

Acting alone does not and will not work in today’s economy, stressed Flint & Genesee Chamber CEO Tim Herman, who noted it is time to do things differently and more inclusively.

“We want to hear from you,” said Herman at the Baker College gathering Tuesday, the first of a series of planned public meetings to gain community input on future investments.

“No single group can make change, but together we can harness the power to create a future we want for families ourselves and future generations to come,” he said to a crowd of about 200 participants.

“We must begin to see ourselves as a larger body, as a region with collective assets worthy of leveraging and opportunities that extend beyond boundaries of the respective cities and townships within Genesee County,” Herman said.

One thing is for sure, according to Forward Together’s facilitator Jamie Greene, the principal of Columbus-based Planning NEXT. This kind of visioning process looks different in every community, he noted.

“There’s no way you can come away from a process like this and not realize that ‘we’re in this together,’” Greene said.

“Opportunities don’t exist within boundaries,” he added. “They spread to where they are most welcome and where ‘self-interests’ are best served.”

Organizers came to the Tuesday event prepared to listen.

“Trust is fundamental,” Greene said. “You’ve got to come to the process with an open mind and trust. We don’t show up with a diagnosis. We are here to learn.”

Wealth is a personal thing, according to Forward Together committee members, who stressed that moving forward it needs to be spread far “differently,” perhaps more evenly, than it has been in the past.

“We live the economy personally,” said Kevin Hively, the Forward Together co-collaborator and principal of Rhode Island-based Ninigret Partners.

“Our destiny is tied to our demography,” he added.

Ultimately, where you live, work or own a business is a fairly good determinate of your economic outcome, according to Hively.

Forward Together committee members are in agreement that you shouldn’t have to move to make it.

How can Flint and Genesee County move more “have nots” into the “haves” column was at the center of public discourse.

“I hope that we’ll collectively come up with great ideas that can be implemented and bring the community back,” said Thomas Shade, president of Lewis & Knopf and treasurer of the Flint and Genesee Chamber.

“I was really encouraged to hear so many participants say that we need to be more culturally sensitive in our activities, outreach and economic opportunities,” said Zuccaro, who notes there’s a significant, and yet unrealized, pay-off in bringing more Latino-owned businesses into the region’s economic stream.

“When you estimate the collective procurement value of the 50-odd Latino-owned restaurants in our region that currently purchase the majority of goods and services outside this DMA (designated market area), the upside of gaining alignment is outstanding,” he said.

Increasing support of the region’s small businesses also dominated the conversation in many of the small group discussions, wondering what would happen if small boot-strap businesses were able to access the same level of funding and visibility as larger corporations.

Many felt that the region’s natural assets could be packaged and marketed from its green spaces to play places in addition to its cultural treasures.

Beyond the physical investments were conversations of the human ones.

“We need to invest in one another,” concluded Changing Productions Market Strategist Boyd Staszowski.

Editor’s Note: Organizers announced that more small group meetings and a social media outreach would follow the Tuesday session in order to glean more input from those who could not attend the session. Watch for future announcements in TheHUB. Click here to participate in the public survey,

Forward Together asks: What would it take (for you) to prosper in Flint and Genesee County? added by Jackie Berg on 05/17/2019
View all posts by Jackie Berg →