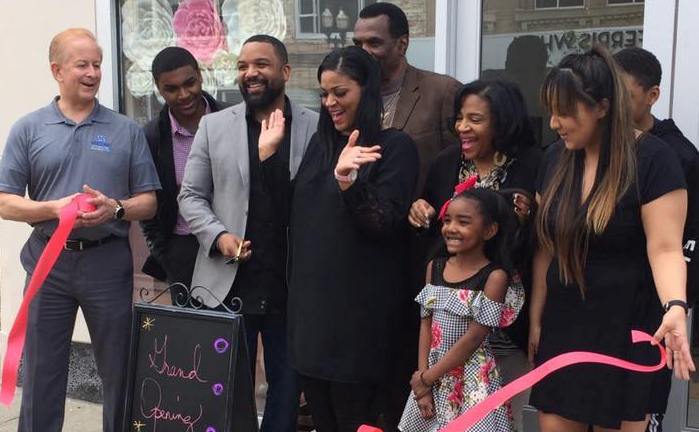 The City of Flint and its potential for development was on the discussion table in Detroit Sunday as talk show host Mark S. Lee and editors of TheHUB met with Metro Community Development CEO Brian Glowiak to discuss the more than $250 million in new investments and related small-business growth in the city.

Glowiak was a featured guest on WXYT 1270AM Small Talk with Mark S. Lee show and in a follow-up interview with editors of TheHUB, which operates publishing divisions in Detroit and Flint.

“Flint is a city on the cusp of transformation,” says Glowiak, who notes like Detroit, the city is experiencing a tidal wave of new investments, which are beginning to spill over into the small-business sector.

This is Glowiak’s “second” stage – it follows his 35-year career at Fiat Chrysler Automobiles (FCA). At FCA, Glowiak served as its vice president of the Chrysler Foundation, head of government relations and other departments responsible for building relationships with for-profit and non-profit organizations throughout the country.

Similar to his motivation and mindset throughout his career, Glowiak accepted this new opportunity to make a difference.

“Although I could have easily retired, I did not want to,” says Glowiak. “Rather than end my career, I wanted to turn the page and start a new chapter in a place where I could really make a difference. … Much like Chrysler was the comeback company for many years, I looked at Flint and saw an opportunity (for it) to become America’s next comeback city.”

As much as big investments matter in cities like Flint and Detroit, it’s the neighborhoods that often serve as a true barometer of economic health, according to Glowiak.

Research shows that cities with a mixed range of incomes are more vibrant and successful. And in cities like Flint and Detroit, inclusionary growth is critical.

“We’ve got to boost the incomes and purchasing power of our city’s neighborhood residents,” says Glowiak, who notes that increases in the number of neighborhood business start-ups and business expansion is an indicator that recent investments are sustainable.

Metro provides creative capital solutions to individuals and start-ups businesses that don’t have access to loans from traditional funding institutions, according to Glowiak whose organization is formally recognized as a Community Development Financial Institution (CDFI).

“What we do is important,” says Glowiak. “Metro’s supported locally-owned businesses and promoted the development of new ventures by providing nearly $3.5 million in capital financing and technical assistance in the past three years alone,” says Glowiak.

Metro’s investment in its new facilities is welcome news to the city, according to Flint Mayor Karen Weaver, who is confident that the city will only continue to add to the $250 million in new housing, hotel, school and community restoration efforts well underway (see details in the Development sidebar).

“Last year our organization worked with 34 small business candidates,” says Glowiak, “This year were on track to double that number, which means more small businesses will soon be posting open signs in and around Flint.

Nearly seventy percent of its commercial loans are made with women, minorities and veterans, according to Glowiak, whose organization funded the recent downtown expansion of the Glam Box Boutique, an African-American owned business as well as the opening of Yum Vittles, a food truck operation which quickly surpassed early revenue projections and is already in growth mode.

Metro is “very supportive” of young entrepreneurs of color, according to Yum Vittles Owner Ebonie Jones, who credits the organization for her business launch.

Jones attempts to find funding and support led her to Metro Community Development’s BizBox, a program dubbed as a “360-degree start-up program.” Its purpose is to give those hoping to open a business –– whether this is a restaurant, retail, service providing, or the manufacturing industries –– a platform and rigorous online training (which includes seminars and testing), with financing up to $50,000 after successfully completing the program.

Once the business entity is established, BizBox can help with securing any subsequent requirements needed, such as licensing or adherence to regulations, depending on the industry. It’s also, at its core, targeted to the underserved in Flint.

“One hundred percent of our team are Flint residents,” says Jones, who hopes to hire more staff soon.

It’s these kinds of stories “that reinforce the importance of our efforts,” says Glowiak, who notes that in addition to small business development his organization creates and preserves affordable housing and promotes home ownership.

The number of American-based small businesses is staggering, according to Glowiak.

“In addition to the sheer force of 28 million businesses, small business owners account for 98 percent of our nation’s employers,” he says.

Despite strong numbers, small businesses are extremely fragile, according to Glowiak.

“One third of businesses don’t survive the first two years,” says Glowiak. “And approximately one half of start-ups don’t live beyond the fifth year.

What’s critical to their survival is their capital formation and their technical assistance, according to Glowiak, whose organization provides both to would be entrepreneurs and existing small business owners.

“One of our most successful programs, BizBox, was created in collaboration with the Kettering University-based Small Business Development Center (SBDC) office, UM-Flint’s entrepreneurial center and Fifth Third Bank,” says Glowiak.

“Given the fact that small businesses account for 60 to 70 percent of new job growth in the US today, we need to recognize that they are the backbone of this country,” says Lee.

“That’s why what Metro Community Development is doing is so important,” he adds. “It’s the Detroit- and Flint-based small businesses that are re-imagining our cities.

In business, statistics are important. And Metro Community Development has some big ones.

In 2016, Metro issued 16 small business loans totaling $1.4 million. Similarly, the following year, it released $750,000 to an additional 16 start-ups and existing business owners. And, its numbers continue to grow, according to Glowiak who reports that last year Metro financed the launch or expansion of 19 businesses, infusing $1.5M in working capital into Flint’s economy.

“These loans are life changing” says Glowiak. “Particularly so when you consider that, among the businesses funded last year alone, 6 were new business starts, 9 were women-owned ventures and 11 were Flint-based businesses.”

Moving a business from concept to reality, takes funding and significant thought and effort,” according to Glowiak.

“Not every small business candidate starts in the right place, but we have programs in place to get them there,” he explains. “Our BizBox program services those ‘want to be businesses’ that might have a great concept, but have not fully fleshed out a plan, and therefore don’t have projections, let alone familiarity with funding requirements.

“Over a course of months, our program walks them through the process,” says Glowiak. “Working one-on-one with business experts, we’ve witnessed incredible growth of program participants and, ultimately, feel that they are well-prepared to be among the 50 percent of small business operators that survive beyond their fifth year of operation.”

“Flint’s new businesses are entering the market at the right time” says Glowiak. “The city is in growth mode and has incredible energy and capital to sustain growth, And, soon, you’ll begin to see the impact in Flint’s neighborhoods.”

Welcome news to many.

Editor’s note: Small Talk with Mark S. Lee airs Sundays at 8 a.m. on WXYT AM 1270. Click here to hear the entire broadcast. You can also access the broadcast on WWJNewsradio.com, TheHUBDetroit.com, RADIO.com, SoundCloud.com and at LeeGroupInnovation.com

The growth and related spin-off developments from the city’s manufacturing center play an integral role in its resurgence, according to Metro Community Devleopment CEO Brian Glowiak.

And there are a lot of them. Among the largest:

The biggest job creator, may be the one yet to come.

Recently, Mahindra Automotive North America announced it’s considering opening a new manufacturing plant in Flint. The development could create up to 2,000 jobs within five years, according to Mahindra reports.

In addition to its manufacturing sector growth, the city’s stakeholders have announced a number of major investments over the past two years. Collectively, the investments top nearly $365 million.