Flint is home to more than 75 fashion-focused businesses whose owners strive to keep pace with ever-changing market demands.

Among the most visible is Kala Wilburn, the founder of her original clothing line Fannie Lucille as well as Flint Vehicle City Fashion Week and its signature Fashion Against Violence event, which she launched to raise violence awareness following the homicide of her brother.

Over the past decade, Wilburn has leveraged these brands and events to mentor and introduce hundreds of women to fashion-related business opportunities — from clothing designers and stylists to models to make-up artists and salon owners.

“I don’t think the goal is ever just to employ yourself,” says Wilburn. “It’s always to bring on people, to reach back and pull someone else forward.”

And she’d like to see more women employing others in Flint to help reduce unemployment in the area.

“We’re living in a time where women are realizing they can do whatever they want to do, whether that’s own a business or be a CEO,” says Wilburn. “Whether you own your own company or work within an existing organization, you can climb the ladder.”

The boundaries that once closed women in and limited their potential are quickly being erased, according to Wilburn.

“Those positions that were specifically, generationally in time for men, women can go after, too,” she says.

Wilburn inherited her entrepreneurial spirit from her grandparents, who were General Motors Corp. workers. They migrated from Mississippi to Michigan to build a better life for themselves and their descendants.

Hard work and perseverance were a part of the family’s DNA, according to Wilburn, who said creativity was critical during the lean years when family members earned the equivalent of Master’s degrees in making ends meet.

“My mom was also an entrepreneur and a single parent,” she adds. “In the black community, there are a lot of single parents who have to figure out a way to make ends meet.”

“But, a lot of times, we see it as this hobby or this hustle, and we don’t realize we can turn it into a big company like everyone else,” she says.

Seeing someone that looks and lives like you do make it is important, Wilburn says.

“I don’t think I’d be where I am if I hadn’t seen my mom blossom as an entrepreneur hairstylist,” says Wilburn. “I witnessed her overcoming business challenges from completing new tax forms and purchasing supplies to negotiating vendor contracts.”

“She told me you have to do these things yourself and showed me how to employ myself and be my own boss,” says Wilburn, who is paying it forward by helping other women see and seize opportunities.

Wilburn knows the importance of nurturing junior talent, especially in a very competitive industry like fashion. As a young designer, she studied abroad and worked for three years in New York, including at Mercedes Benz Fashion Week. She knows how vital it is to expose the next generation to all that’s involved.

“It’ll help them express themselves and push their gifts forward and allow them to know their dreams are possible,” she says.

Wilburn also casts the models, even going so far as to hire a model coach. She helps those on the catwalk get their comp card and headshot in order to keep their career going.

“Fashion can be one of those things people don’t look at as a career,” she says. “But we wear clothes every day. So there is definitely a career path for that for both women and men.”

Wilburn says women-owned businesses like hers are playing a big role in Flint’s economy.

“We just need to continue to grow it, continue to support women-owned businesses and continue to build a network where everybody is supporting everybody,” she says.

Flint’s resurgence is dependent up not only building a vibrant fashion district, but driving it forward, according to Wilburn, who partnered with Jackie Berg, the founder and publisher of TheHUB Flint, and Ebonie Gibson, the founder and head of I’m Building Something Consulting, to create a synergistic plan to help Flint capitalize on the growth of urban streetwear.

Together, they discovered an important gap in the industry. The size of the global apparel business is growing and is expected to generate double digit growth between now and 2020, according to McKinsey & Company, a worldwide management consulting firm that conducts qualitative and quantitative analysis to evaluate management decisions across the public and private sectors.

In comparison, retail clothing and apparel spending by Flint residents is projected to top $157 million in 2026 from $154 million, marketing research firm Woods & Poole reported in 2016.

The gap between Flint’s s projected 2 percent growth rate and the double-digit growth predicted by McKinsey & Company supports the economic potential of Flint fashion businesses to capture an additional $1 million (one percent) to $12.6 million (8 percent) of spending. 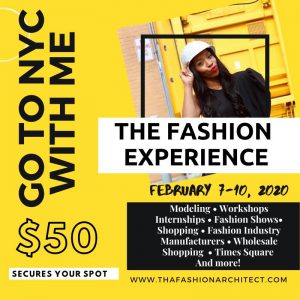 Although no formal market studies are available for public consumption, city stakeholders widely acknowledge that the majority of Flint residents shop outside city borders — giving rise to collective agreement that Flint is losing millions in local spending power, particularly among its student population.

And, that’s the gap that Wilburn and women like her hope to prepare others to fill.

Editor’s Note: Kala Wilburn is hosting a NYC-based “Fashion Experience” Feb. 7 to Feb. 10, which will provide participants with a first-hand look at the fashion industry through the stewardship of Flint’s fashion leader. Learn more at: thafashionarchitect.com