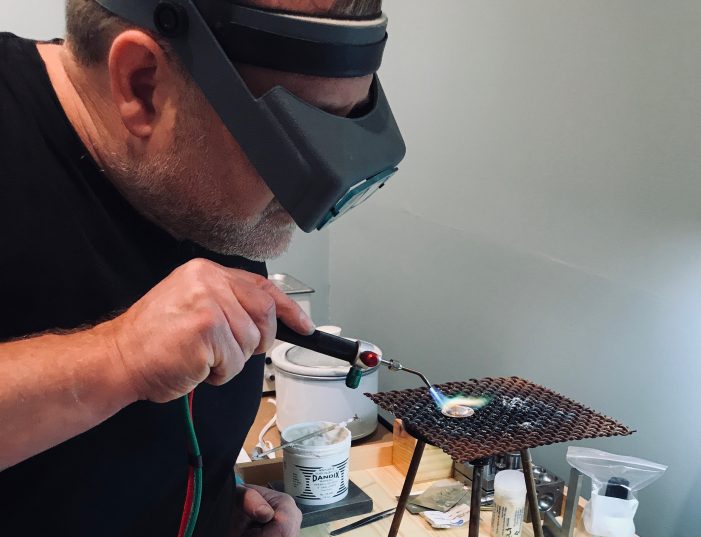 Aaron Bigler was searching for the perfect groomsmens’ gifts before his wedding to Ashley Kassuba, but he wanted the gifts to reflect his roots in the community.

After living in the city his whole life, even buying a home near Kettering University two years ago, Bigler recently moved across the state to be with Kassuba, making the symbolism of his jewelry choice even more significant. When he learned about Flint Trading Co. and metal smith Walter Robert McAdow’s custom-designed pieces, he decided to stop in. The result demonstrates how Flint Trading Co. uses local and regional artisans to hand-craft designs that help tell stories of the city.

McAdow created a custom piece of jewelry based on a concept he says came to him in a dream the night after he spoke with Bigler.

“I talked with him about my family and where I came from and let him use his creative genius,” says Bigler. “When he came up with design that he did, I completely fell in love with it.”

Bigler’s family, like many in Flint, was involved in the car industry. His great-great-grandfather worked at Standard Cotton Products, a business that made the cotton-stuffing for car cushions, and he was part of the historic “sit-down strike” against General Motors. Bigler’s dad worked at AC Spark Plug, and his grandfather, worked at Chevy in the Hole. Bigler graduated from the University of Michigan-Flint with a degree in environmental science and spent time working on the contamination issues left at Chevy in the Hole after the plant’s closure.

In addition to creating the groomsmen’s pieces, McAdow surprised Bigler with extra pieces for Bigler and his grandfather, who was a huge inspiration for this piece.

Each jewelry piece made for Bigler features silver, convex shapes combined with small rivets, as an ode to industrial processes, made to resemble the carriage wheel. Brick pieces from the demolished building where his grandfather used to work are safely contained with a rubber ring between the silver disks, to represent Flint’s tire-making history.

Another surprise for Bigler is the box the jewelry is packaged in, handmade at Factory Two – so the entire project, from start to

Factory Two’s Joel Rash enlisted the help of Don Shank, one of the teachers at Factory Two, to create the boxes. Rash praised McAdow’s work.

“He is an incredibly skilled jeweler and needs to focus on his craft,” Rash says. “So, even though we are primarily a place where makers come in and rent the space, we took on the challenge of a commissioned project.”

For McAdow, the inspiration behind each piece is what determines the materials used in the design. The work at Flint Trading Co. becomes more about creating a narrative than simple decoration.

“I get a lot more joy out of the whole process,” he says. “Process is part of the piece, even if you cannot see that process at the end. It is knowing the work that went into it that is key.”