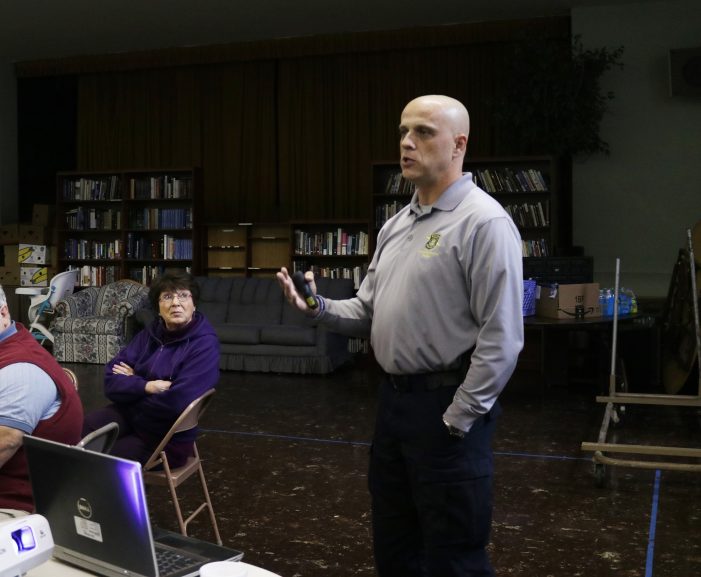 Part of the drive of those in neighborhood associations and block clubs is their devotion to place. Those who have made Flint their home for some time understand that the answer to real change lies at a micro-level – meaning getting in there and getting things done.

Carma Lewis, president of Flint Neighborhoods United (FNU), is leading the charge. Her group’s collective of neighborhood associations, crime watch captains, and block clubs meets the first Saturday of each month at the Woodside Church to trade information and resources so residents can build upon their everyday lives.

“The highly charged issue is on the increase not only in Flint, but statewide.

The hot-button topic this month:  Human trafficking. Lewis had seen a recent presentation made by the FBI that struck her, so much so that she added it to her November agenda. 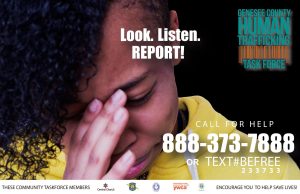 “People don’t report it – even if it’s something that’s happened to them,” she says of the highly charged issue that’s on the increase not only in Flint, but statewide. “The person—the victim—would have to want to put an end to it to really get out, too. It’s not something people are so willing to share.”

Shame and disbelief are part of the insidious mix of an issue that has captured national, as well as much local, attention. To this end, Lewis invited Trooper Steve Kramer, Community Service Trooper Recruiter with the Michigan State Police, to offer a presentation he makes regularly to schools, area groups, and community organizations like this one.

“Human trafficking is the buying and selling of people, pure and simple. Sometimes the Impression is that the victims fall into this voluntarily. They do not,” he says emphatically.

During his five years on the job, Kramer has heard more than his fair share of reports on an issue that’s not isolated to Flint. “The inner city isn’t the only place it happens. I don’t want anyone to think their community is above it,” he warns. “Economically depressed areas aren’t more commonplace for human trafficking. It doesn’t seem to matter what the community is like.”

Prostitution is the larger aspect of what’s involved, but the illicit buying and selling of drugs is the other.

Probably the most disturbing detail of all is the minors who fall prey to perpetrators, children as young as 12 to 13 years of age. Kramer was specifically trained by the Southeast Michigan Crimes Against Children Task Forceto handle this most upsetting aspect.

“It’s our biggest concern right now,” he says, adding that addiction is a major factor too.

“The goal is to get a person hooked on some kind of a substance. Opioids are obviously a huge problem. A pimp will give these people – and they can be young women and men – meals and a place to live. They are expected to earn money and keep very little for themselves.” Kramer adds that prostitution is the larger aspect of what’s involved, but the illicit buying and selling of drugs is the other.

“They’re sold into it by those they know best, and more often than not tricked into it.” – Steve Kramer, Community Service Trooper Recruiter

Less than three percent of those involved in human trafficking are kidnapped as well. The way most become part of the system:  through their family.

“They’re sold into it by those they know best, and more often than not tricked into it,” he adds.The difficulty comes in getting out. Fear is the ammunition of the trafficker. “The victims are brainwashed into thinking this is the best it’s gonna get. Some have nowhere else to go, some are runaways. They think it’s better than the alternative.”

Kramer’s job is to educate, not enforce. The FBI is involved, but even they don’t have a specific officer attached to the issue in the area, although Kramer says one larger initiative of late has been Governor Snyder’s creation of a statewide human trafficking committee. Although Kramer doesn’t make arrests, the 65 troopers on the force he works on do. They’ve all experienced incidences of human trafficking.

“Our force has specialists – homeland security teams – who get involved, and sometimes the fugitive team does. They will operate stings and sweeps. Everyone’s involved in some way.”

Most trafficking activity, too, does not happen at venues one would peg – like shopping malls or outside the movie theater. Children are not abducted in public, as is commonly thought. It’s the internet more often than not that’s a recruiter’s biggest tool; outreach can be just that simple.

A red flag could range from a child who is absent far too long from school to a neighborhood house with a high – and sporadic – amount of automobile traffic. Helping someone get out is another, more complex matter.

“Girls will look at a pimp like he’s their lover boy. She’ll think, ‘I’m doing this so we can be together!’ It takes roughly five times for someone to leave before they conclude that they should,” says Kramer. He emphasizes that they have to want to get out of the situation.

“If they don’t want to, they’ll run right back.” Kramer urged reporting even the smallest incident or suspicion, and offered useful websites and emergency numbers at the end of his presentation for residents to call. “If you think something might be going on, it quite often is.”

After the meeting, Lewis received a lot of feedback from those in attendance, over facebook and by phone. Everyone thought Kramer’s presentation was informative, and useful. “These are involved people who appreciate hearing from a local official,” Lewis reports. “And this issue is important. It needed to be said.”

In the United States, more than 100,000 children are forced into prostitution every year. Many girls are taken at the age of 13, and many boys are taken when they’re 12. He said 20 to 25 percent of those children victims are boys, but the majority, or about 80 percent, are girls.

Pimps often lure young girls by acting like an older boyfriend, who can “give” them things. They often make false promises about giving them a “better” life and, early on, buy the victims expensive clothing as gifts.

Some may lure the girl into modeling or dancing and  gradually increase demands for partial or full nudity.

Pimps often use the Internet to lure boys by presenting themselves as attractive young girls. They encourage the boys to send indecent photos of themselves and then use them as blackmail to drag the boy into the trade. Sadly, the approach often works, according to Kramer, who states that often guys will continue to do whatever the pimp wants to avoid being “outed” to friends and family.

Once the person is forced into prostitution, Kramer said these people use blackmail to keep someone there.