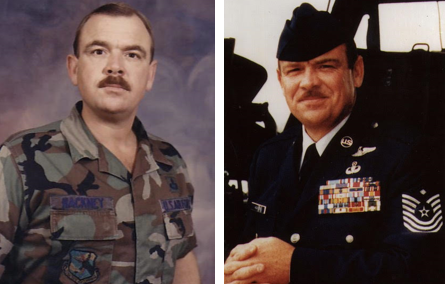 Duane D. Hackney, who served as chief master sergeant in U.S. Air Force during the Vietnam War, will inducted into the Michigan Military and Veterans Hall of Honor on May 17.

He is one of 12 of Michigan’s most distinguished military veterans who will be recognized at the first-ever Michigan Military Veterans Hall of Honor ceremony in Lansing. The event begins at 2 p.m. at the Michigan Military Museum, 702 W. Kalamazoo St. The event is free and open to the public. To learn more, visit www.mimilitaryvethallofhonor.org or call 517-539-1903.

Hackney was awarded 28 decorations for valor in combat and more than 70 awards and decorations, becoming the most decorated airman in Air Force history. 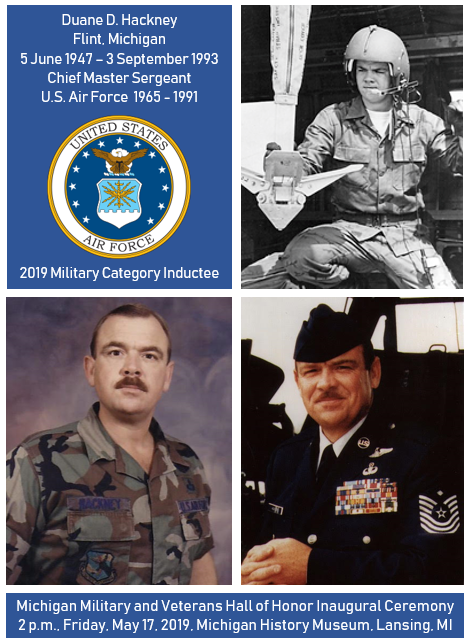 On his 10th mission, in April 1966, he was hit by enemy fire while pulling a wounded Marine pilot aboard his HH-3E “Jolly Green Giant.” Five times in the months ahead his helicopter was shot down.

In 1967 Hackney descended from his HH-3E to look for a downed pilot near Mu Gia pass, North Vietnam. He searched for two hours until bad weather forced a return to base. The severely wounded pilot was found. He carried the pilot back to the helicopter to begin their retreat.

Before they could clear enemy air space, anti-aircraft artillery struck the helicopter, and Hackney strapped his own parachute on the pilot’s back and helped him get out the door. Before he could buckle the chute, the Jolly Green Giant’s fuel line exploded, blasting Hackney through the door.

Holding on to the chute with his arms, he managed to pull the cord before plummeting into the forest 250 feet below. The chute slowed his fall, but he still plunged 80 more feet to a rock ledge. Severely burned and pierced by shrapnel, Hackney managed to evade capture.

The rescuer was rescued. He was the only survivor of the thwarted mission.

For giving up his parachute and risking his own life, Hackney received the Air Force Cross, second only to the Medal of Honor. He was the youngest person and the fourth enlisted member to receive the medal. His combat tour ended in October 1967. He died in 1993 at the age of 46.

In 2018, Michigan became just the 12th state with an entity to recognize veterans, active-duty and reserve personnel statewide. The inaugural event will honor soldiers with a connection to Michigan for their military service, or for their combined military, community and professional accomplishments.

“Honor is a core military virtue that, unlike fame, implies true worth, genuine virtue and real achievement – valorous and meritorious,” says retired Major General Robert W. Smith III, president of the Michigan Military and Veterans Hall of Honor. “The military veterans for whom we will honor at our inaugural ceremony exemplify these attributes through their military, personal and professional achievements.”

This year’s Hall of Honor inductees will be honored in two categories: the “Veterans” category and the “Military” category. Hackney will be recognized on the Military category

Other inductees in that category include:

Those who will be inducted in the Veterans category include:

Flint native, war hero Duane Hackney to be inducted into Michigan Military and Veterans Hall of Honor added by TheHUB on 05/07/2019
View all posts by TheHUB →