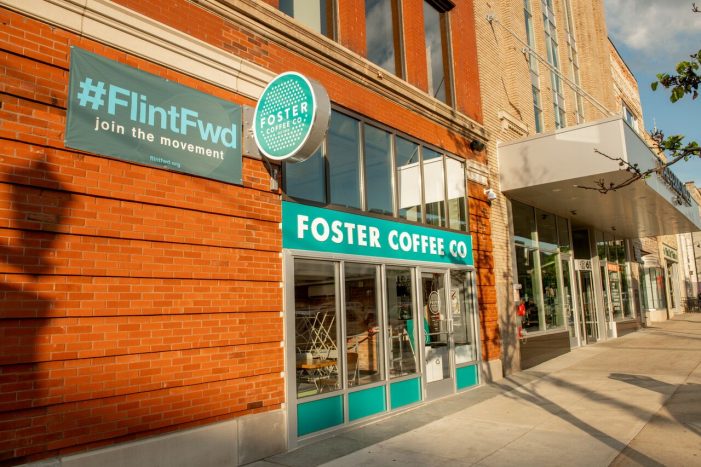 Flint is emerging as a city where great ideas come to life as entrepreneurs and large companies open new businesses, share their inspiration with others and add to the city’s growth.

That’s helping change the perception of a city that has been challenged by the water crisis and the economic fallout caused by a shrinking auto industry. Now, Flint is one of the cities the Michigan Economic Development Corp. (MEDC) points to when it talks about its goal to make Michigan a place where ideas are born and can be supported by the local workforce.

“Fertile ground can be anywhere that somebody has a great idea,” Hundt says.

Flint’s fashion business is on a roll and keeps growing. There are more than 75 businesses involved in a broad scope of fashion-based activities from design, manufacturing, distribution and sales, according to an audit by TheHUB Flint. Those makers have serious global growth potential.

Many of them are showcased at the annual Vehicle City Fashion Week. In the six years it’s been running, more than 50 Michigan designers, retail stores, and boutiques have revealed their work during the event, which has attracted more than 2,500 attendees.

One clear sign of the growing awareness of the market potential of Flint’s fashion culture is the formation of alliances aimed at leveraging growth trends. A new organization called the FASHIONHUB collective is aligning Flint’s fashion-based businesses behind retail pop-ups, marketing, events and other shared services.

The collaborative venture is between TheHUB founder Jackie Berg; Fanny Lucile, Vehicle City Fashion Week and Fashion Against Violence founder Kala Wilburn, and I’m Building Something founder Ebonie Gipson. The effort will capitalize on what they claim is a local market worth $225 million.

Several fashion businesses also just opened in the Ferris Wheel, a co-working space on Saginaw Street, which is also home to industrial and service companies as well as 100K Ideas, which helps entrepreneurs develop their businesses. Thirty-nine new businesses of all types recently opened there.

“The true innovation is always going to be the work that the inventors and all the people with great ideas are doing there,” Hundt says. “(Ferris Wheel) has services that will help them come to life.”

MEDC played a key role in creating the Ferris Wheel through its Michigan Community Revitalization Program (MCRP), which awarded Skypoint Ventures a $1 million performance-based grant to redevelop of the Ferris Building, and the Michigan Strategic Fund (MSF), which provided $1.5 million to establish the center. MCRP is part of MEDC, which also works on behalf of the MSF. Performance-based grants are paid out in increments based on those receiving the grants meeting specific milestones.

While fashion is emerging in the city, manufacturing innovation has been Flint’s heritage. Long known as Vehicle City, it was home to numerous General Motors plants where it employed about 80,000 people in its heyday. Most of those plants closed in 1990s and early 2000s and manufacturing and the jobs pretty much went by the wayside. Now they are beginning to come back.

Lear’s decision to make a $29.3 million investment on a 33-acre site that once was Buick City will bring 600 jobs to the area. It chose Flint because of its proximity to many potential skilled workers and its commitment to give back to communities in which it operates. The company received a performance-based grant of $4.35 million from the Michigan Strategic Fund.

“That’s something that shows what a great workforce there is in Flint,” Hundt says.

While Lear is creating a new manufacturing operation in the city, the Charles Stewart Mott Foundation is driving planning for a 23 million project to redevelop part of the former site into the Buick City Industrial Park, which would include environmentally friendly warehousing, packaging and light industrial space. There would also be biking and walking trails to connect the property to the Flint River and surrounding neighborhoods.

Mott would contribute $16.5 million to the proposed project, which garnered an additional $6.5 million commitment from the Michigan Strategic Fund.

At the February MSF board meeting, the MEDC board approved a transfer of $1 million from the Michigan Community Revitalization Program for financial feasibility to be conducted, with the potential to acquire and develop the former Buick City site.

C3 Ventures invested $9.68 million in DuPont Facilities on James P. Cole to make plastic parts for electric car maker Tesla Motors and create 380 jobs. The company received a $5.7 million performance-based loan from MEDC. It chose Flint in part because of the high number of water bottles accumulating in the city. Those bottles will be recycled into plastic-based car parts for automakers.

While that plan is still in the works, the company is currently turning shipping containers into homes. It created a 3D printing facility in the complex called C33D and a warehouse, called C3 UP, where about half a dozen large, metal shipping containers are being modified to become homes.

There are other opportunities that could bring more manufacturing to Flint as it becomes a larger part of the rapidly growing mobility business. Mobility is defined as technologies and services that enable people and goods to move around more freely. That opens the door for new, innovative businesses and collaboration with companies, big and small, local and international, to create the technologies needed for the rapidly growing market.

Flint already has a jump on the mobility growth. Kettering University’s Mobility Research Center gives the city a one-of-a-kind facility that can attract companies from all over the country to do research and testing in partnership with the university.

“The next generation of mobility and auto is partnerships and collaboration. Partnerships are key,” says Hundt, pointing out that MEDC is a facilitator through which businesses get contact information for potential partners.

For example, MEDC and its Pure Michigan Business Connect program have partnered with the Michigan Israel Business Accelerator (MIBA) to bring more business from Israel to Michigan and create partnerships with current Michigan businesses. MIBA is targeting such sectors as advance manufacturing, mobility, cyber security and defense. In addition, it is working with businesses that deal with water, health and life science, and agriculture, all areas that would offer Flint growth opportunities.

Bringing in business from overseas or creating partnerships opens the door for more investment in Flint and an opportunity to build on its automotive and manufacturing heritage and add new expertise. Advanced manufacturing, mobility, cyber security and defense are big businesses in Michigan, and there is room for companies of all sizes.

“MEDC’s goal for Michigan is to be Automotive 2.0, which will be a mix of large companies and startups in communities,” says Hundt.

That offers Flint and other Michigan cities an opportunity to grow in areas such as IT, computer applications, printing, smart design and cyber security.

Michigan is developing a robust cyber security community focused on connecting the interests of the cyber, automotive, defense, and aerospace industries, Hundt says.

That, he says, will take Michigan to Manufacturing 4.0.

Flint can be a part of that growth and more. It has the chance to move to Flint 4.0 with the innovation it is seeing from startups, new and established businesses and its workforce.

“Flint has a history of innovation and startups with ideas that came to life,” Hundt says. “The true innovation is always going to be the work that the inventors and all the people with great ideas are doing there.”

Lead photo: Foster Coffee is one of the latest businesses opening in Flint since 2016. It is adjacent to the Ferris Wheel.