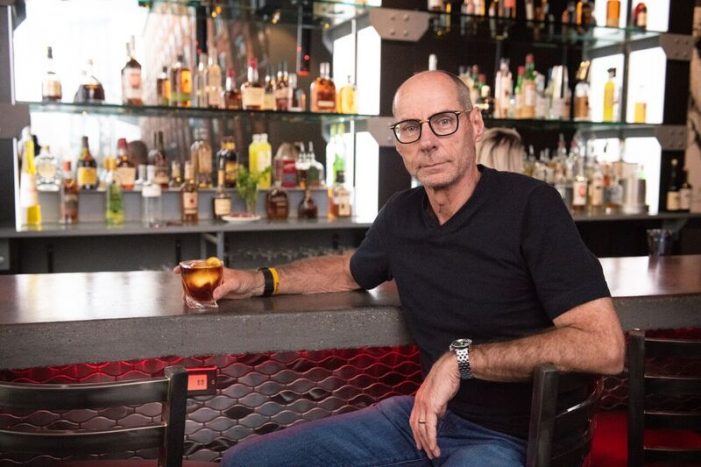 Stepping through the door of X, Flint native and developer Phil Shaltz’ newly opened downtown lounge, is a bit like time travel.

The mellow mood and social vibe hovering in the space between smooth tunes by Nancy Wilson, Frank Sinatra and other vocal greats is reminiscent of the speakeasy era that helped inspired the owner’s vision.

But if you’re in a rush you’re in the wrong place.

“It takes 18 minutes to make the drink the way we want to make it,” Shaltz says.

The slower, laid-back pace inside X, located at 555 South Saginaw, is as deliberate as the house bartenders’ careful wrist action. In the mix of increasing downtown destinations and attractive leisure spots, Shaltz wanted to establish a venue that encouraged mingling and enjoying the spirit of community.

While most new club and bar owners would have hoped to see patrons lining up around the corner outside for weeks, the X staff is happy to see them trickle in, sit down and relax.

The plan to “start slow” has been met with a positive public response, adds Shaltz, who also heads Shaltz Automation.

“It’s a slow process, intentionally,” he says. “What we’ve learned by talking to people in this industry is when you open a high-end cocktail establishment you have to educate customers that this isn’t a typical bar where you go in and slam down drinks.”

Backing the bar is the thematic, visual centerpiece, a mirrored reflection of Manhattan scenery. Shaltz’ original plan was to occasionally switch out the image to reflect the moods of other cosmopolitan cities like San Francisco and New Orleans, but he’s getting “good reaction” to the New York motif.

“I think that’s what’s attracting a lot of people,” he says.

He was impressed by the New York speakeasy scene when the Flint native and his wife began spending time there about 10 years ago. He decided X would be “reminiscent of classic, urban New York.”

“It’s something that’s unusual for Genesee County,” he says.

“There’s a real buzz about where this is situated and what it looks like inside, specifically. The tenor we have is a very relaxing, warm, inviting atmosphere.”

As unusual as the concept was the entrepreneur’s approach to recruiting his staff. Already owner or co-owner of several downtown establishments, including Table & Tap restaurant next door, Shaltz knows the value of experienced team members. But for X he

“We hired by personality and enthusiasm, spirit, congeniality and how they converse with the customers,” Shaltz says.

The name and the sort of bar-antithesis approach to speed and hospitality were almost accidental, he says. Originally, the vision was for a quick-service, “Panini express” alternative to Table & Tap’s dine-in environment. But Shaltz re-thought the concept and only the “X” remained of the initial express theme.

Like an old algebra formula, the new lounge’s name represents a variable.

“It means everything, and it means nothing,” Shaltz says, playfully.

What he doesn’t want to see vary is the momentum X and other incoming businesses are contributing to energy downtown. He says the lounge adds to the diversity of restaurant and bar destinations in the district.

“They all bring a different form of high-end food and craft cocktail, more casual dining,” says Shaltz. “As people come downtown for the experience, this gives them another option.”

Word-of-mouth advertising has been strong, he says.

Located across from the Capitol Theatre, X also adds to the broader landscape of culture, entertainment and dining the city has to offer residents and visitors, he says.

“That should help increase their wonderful feeling about the city of Flint and the wonderful environment when they leave the Capitol Theatre,” he says.

For more information about X visit The X on Facebook or e-mail phils@shaltzautomation.com.