By Jaishree Drepaul-Bruder on 01/13/2020Comments Below 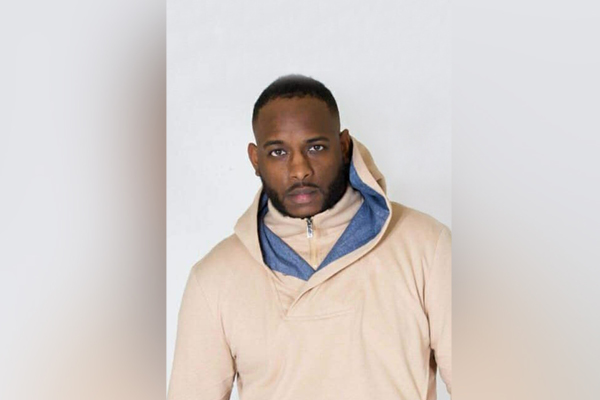 Philip Loving is putting Flint on the map. The Walk N Art founder is getting ready to showcase his creations at New York Fashion Week (NYFW) in February. It’s not the first time the Flint-based shoe designer will attend, but he is just as excited as he was last year.

“It’s amazing. My success has grown from being a late class assignment in my college color theory class to being featured twice in NYFW,” Loving says. “I have had a number of celebrities wear my shoes and I’m working on some movies and music videos. So everything is moving in the right direction.”

The direction he speaks of is eventually having his custom-made shoes on the shelves of big department stores and becoming a household name akin to the likes of French footwear designers such as Christian Louboutin.

Like Louboutin, Loving’s offerings are fantastical and dreamy. He buys the shoes from wholesalers and transforms them into works of art from the comfort of his home studio. The bedazzled finished products are not for the faint of heart or those who are trying to keep a low profile.

“My clients dress to impress,” Loving says. “They want the be the talk of the party and stand out. They want to be a celebrity, if they are not already.”

The driving force behind Walk N Art’s increasing popularity has been social media and word-of- mouth. The company has a loyal fan base that has been steadily growing and that is generous with sharing product pictures and extolling Loving’s artistic genius.

Local support has not been lacking and Loving doesn’t take it for granted. In fact, he feels that  cooperation between business owners is a growing trend that has the potential to make Flint great again. “We need to support each other individually, just as much we need more big businesses to come in and bring more jobs into the city,” he says.

And when it comes to helping others, Loving walks his talk — by occasionally giving younger people in Flint the opportunity to proudly strut their stuff in a pair of his shoes, free of charge.

When asked why he does that, his answer is simple: “First, my mama raised me right. And second, no matter how big I get I’m going to always look out for home. My heart is here in Flint.” 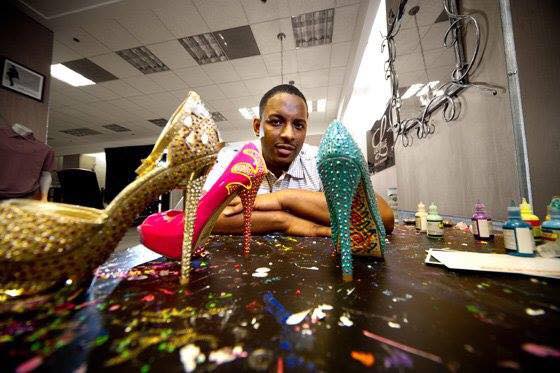 If clothes make the woman or man, what of their shoes?

Shoes, almost everyone would agree, make the clothes even better. They are the topper to every outfit, the end-all and be-all for those who love footwear.

They are also highly adaptable, able to take on multitudinous shapes and forms and colors. There are, it seems, endless ways to create the object that encases our feet. That’s where the fun comes in for Philip Loving III.

“I create about 12 pairs a month,” says the Flint-based footwear designer and founder of the company Walk N Art.

Philip Loving says he creates about 12 pairs of shoes a month.

Making a mere dozen in 30 days doesn’t sound like much, but Loving’s shoes are no ordinary pump or boot. The designs are as high glam as they come. Each is hand-painted by Loving with acrylic fabric paint mixed with fabric glue and a measured amount of glitter. The effect appears like beading but is really decoration. The mix of ingredients is … a secret, he says.

Loving buys the shoes from wholesalers and does the artwork out of his home studio. He uses the shoes and boots as a canvas, painting them much as his great uncle Al Loving did. He was a well-known African American abstract expressionist and painter whose highly colorful work utilizing fabric and paper was Loving’s inspiration.

“He really influenced me,” says the designer, “in every way. He used bright colors and swirls and patterns that had no business going together. I do this too, and I also make it work.”

After high school, Loving attended the International Academy of Design and Technology in Troy to study fashion design and marketing. It was a color theory class that really pushed him to pursue his craft.

“The class was competitive,” he says, recalling that his fellow students would turn in some wild creations. “One girl made a bra out of Skittles.” Another student turned in a pair of shoes for an assignment that was doused with different colors. The next day Loving bought a pair of heels and splashed them with his own mix of different hues.

“The girls in my class screamed,” he says.

The shoes just happened to be his professor’s shoe size. Needless to say, Loving turned his then grade of C in the class into an A.

“I was supposed to do a presentation on the pair and had no idea what I was going to say but didn’t have to since there was so much excitement about the shoes,” he says.

Loving’s professor also helped give him the nudge he needed.

“After about a year, he told me I was too good to just be throwing paint on shoes. He encouraged me to take my time and put forth more effort,” Loving says.

The next pair he created embodied that effort.

“I thought about what I was going to do, and felt the Lord told me to do dots, so that’s what I did,” he says.

Loving found the glitter-based glue he started to use dried like rhinestones. “My shoes became real bright shiny and glittery. Girls like bling. It worked.”

Loving continued his studies at the Institute of Art in Dallas, Texas, which meant moving south. He ended up staying in the city for nine years, taking classes on and off, working some semesters more than others in order to pay for school.

He garnered positions at the Dallas Mavericks’ retail shop at the American Airlines Center, at the North Park Mall, and at Dillard’s, all of which gave him the chance to learn about retail and marketing and, importantly, how to establish a relationship with the customer.

“The job at Dillard’s was only part time, but it opened my eyes so much,” Loving remembers.

He soon was helping with visual display, meeting sales rep’s from various clothing companies, and taking part in creating the store windows.

After a year, a classmate of Loving’s motivated him to move to Houston, which he did, working full-time at Nordstrom’s at the Houston Galleria. The high-traffic mall gave him another great opportunity to experience the retail customer. This time, he worked in shoes – children’s mostly but also in women’s and men’s.

“It gave me the drive I needed to have my own business,” he says.

The mall was also the site of frequent visits by stars of the music industry. Houston has a very thriving music scene, heavy mainstream as well as rap music. It had been Loving’s goal to get a musician or movie star to wear his shoes. He knew getting them on the feet of the famous would get him the visibility he needed. He recognized the power of celebrity.

“I knew I had a hot item. I knew if I could get somebody to wear my shoes in public, it would make an impact,” said Loving.

It just so happened that the mall was also home to a boutique owned by LeToya Luckett, one of the singers from Destiny’s Child.

“I got to present my shoes to her manager, who just happened to be her mom, Pam,” says Loving.

Luckett had seen Loving’s work and offered to sell his shoes in the store, lending him advice where she could and opening many doors just when he needed it.

“My celebrity clientele went up and up since a lot of singers, musicians, and actresses came to Houston, like Jill Marie Jones, Vivica Fox, Brian McKnight, and Keri Hilson,” says Loving.

The exposure led to Loving’s working on a video with rapper Rick Ross and on a play with the singer T-Boz.

His success in Houston gave him the comfort level he needed to return home to Flint in 2015 where he’s been at it hard.

Walk Fashion, a company based in Detroit, wanted Loving to a part of Paris Fashion Week. Loving says he was beside himself at the chance to go to the City of Light.

“I have been able to invest myself even more,” says the designer, so much so that he set his sights on getting to New York Fashion Week this past spring. Through a fashion marketing group that he found online, Loving was able to show 20 pairs of shoes.

“This was on my bucket list,” he says of the February 15, 2017 show. “I prayed about it before I came across the website. The president of the company contacted me a month after I applied. He loved what he saw and couldn’t wait to see my shoes in his show.”

The first call Loving made was to his mom because, as he tells it, he was on Cloud 9. Calls to his great aunt and his pastor followed. Loving knew going would open more doors for him. He didn’t know the next stop would be even better.

“I got a call a few months later from Walk Fashion, a company based in Detroit. They wanted me to be a part of Paris Fashion Week,” says Loving, who was beside himself at the chance to go to the City of Light.

Four days there made an indelible impression on him. “Everything there is fit, and so well-tailored. We are so matchy-matchy, too,” he says. “”here, it’s a mix of everything – but it all goes together.

Loving capped off his stellar year with his own show at the Flint Institute of the Arts. The December 15 runway show showcased his 15 pairs of heels, a men’s collection (his first time showing it), and bodysuits designed by his cousin, also a fashion designer.

“All of them were music-inspired. When I paint, I listen to different genres of music,” he says.

One of his favorite songs is “Ready for the World” by Gerald Valentine. Loving approached Valentine to perform at the show and he agreed. He played his eighties hit “Oh Sheila” while the models were walking the runway.

Without a boutique or website, Loving primarily relies on word-of-mouth and social media for sales. “People come to my Instagram or Facebook page and ask for my shoes,” he says.