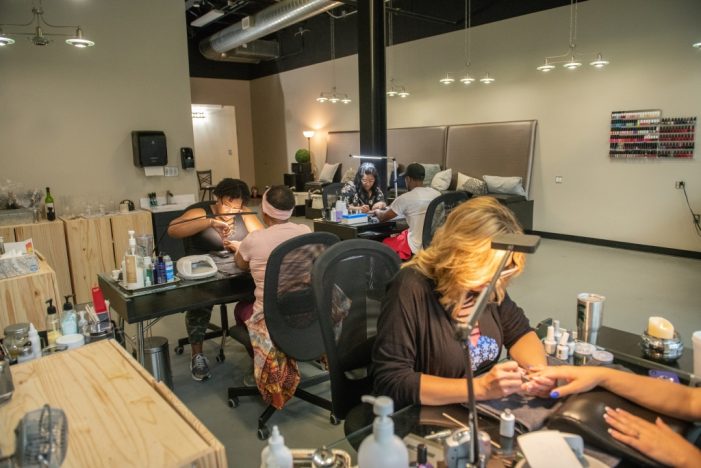 Represented by decades of its team’s combined nail grooming experience, the shop fills a service niche in the increasingly busy blocks of South Saginaw Street downtown. As the only business of its kind in the immediate area, Eight Ten helps to diversify the district. The co-owners will celebrate a grand opening from 2 p.m. to 6 p.m. Aug. 5.

“We both are ambitious,” says Alex. “My wife’s been doing nails for a while. She’s been very knowledgeable of the field and, obviously, this isn’t the kind of journey you want to take if you don’t have some background in it.”

Originally from North Carolina, Alex started dating Flint native Natalie after the pair had been platonic friends. They bonded in their relationship and visited a Detroit nail shop a few years ago, inspiring the vision for Eight Ten.

“We enjoyed the experience, and in Flint there are still a lot of gaps to do certain things” in business, Alex says. “We both have an entrepreneurial spirit, so we figured we could implement that in our area.”

Already living downtown, the Kadies didn’t have to look far to survey available commercial spaces before settling on 555 South Saginaw St., the Wade Trim Building. With help from friends and family, like Natalie’s sister, Keysa Smith, who owns Spectacular Spudz restaurant, they invested to open the shop’s doors.

The co-owners weren’t the only members of the community to note the previous absence of nail salons downtown. Other business proprietors and employees in the area began stopping in during their lunch hours and after work.

“It’s been pretty steady,” Alex saysThe convenience of a pampering outlet in a neighborhood gradually being repopulated with both residents and merchants is one of Eight Ten’s attributes, he adds.

“They just come in, get their nails done, and they’re on their way, instead of having to drive home and then leave for a salon appointment.”

While the shop, like many others, accepts walk-in patrons, Alex says they’re “developing an appointment culture” to better accommodate customers.

One of three nail techs, Natalie’s background includes 19 years in the field. Alex’s career has largely revolved around interacting with the public, which he views as a strength in managing and operating the Eight Ten Nail Bar.

“I have a diverse background,” he says. “A lot of it is in customer service.”

In 2015 Alex won the Frontline Ambassador Award for hospitality, besting more than 100 nominees for his work at the Courtyard by Marriott Flint’s front desk. Natalie’s career was already rooted in grooming, but her husband floated between retail and other positions, such as gate agent for an airline.

“It’s cool,” Alex says. “In our marriage we don’t argue. We have disagreements, but my thing is ‘let’s have a conversation,’ and that’s transitioned into our business, too.”

Waking up in the morning, going to work and coming home with the same person can be challenging for many couples, “but we’re friends,” he adds.

The August ceremony will showcase Eight Ten’s space in an open-house-style setting. Hors d’oeurves and beverages will be served.

Within the next several months, the shop plans to add an esthetician to its staff.

Among Eight Ten’s various services are pedicures, which Alex strongly recommends, even for men.

“It’s a type of therapy. Anybody who works on their feet, I tell them to come in and get a pedicure,” he says. “Even if you’re just walking every day, you’re not re-setting your feet if you don’t get pedicures.”

As he expects of any patron receiving any of the shop’s services, Alex says pedicure customers will have no regrets.

“When you step off of that platform you’ll feel like you’re walking on clouds,” he says.