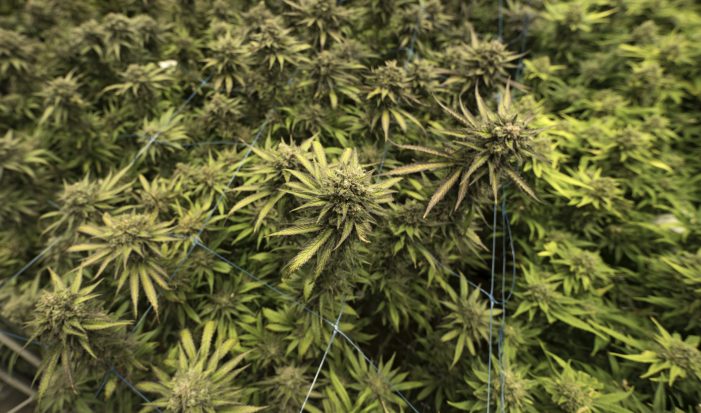 Kevin Schronce, a lead planner for the City of Flint, believes the city will allow growing facilities for medical marijuana.

According to Schronce, the issue is scheduled to be discussed at the city council meeting tonight, March 12, where a presentation from the Michigan Municipal League will provide an estimate of the amount of revenue growing medicinal marijuana will bring to the city.

“If the community chooses to opt in and allow these facilities to open up, they are eligible for some revenue,” he tells the group gathered for the Flint Neighborhoods United monthly meeting. “The final ordinance per charter is up to council.”

Look for updates on the medical marijuana issue on TheHUB Flint.

Schronce cautions that once a business is started and has established rights, it’s very hard to take those away and encourages Flint residents to make their wishes known.

The language within that ordinance as to how and where the facilities would operate is key, he says. The current draft of the ordinance is 300 pages long and will may be subject to changes upon the council’s review.

The provisioning centers would only be allowable in those districts of the city that are used for industry, Sconce says. State law says commercial growers must be located only in industrial areas.

Flint is split into districts A through G, with A being low in density on up to E, F, and G representing heavy industrial and commercial areas.

Schronce said it was worth noting that before voters approved recent legislation for the use of medical marijuana, nobody in Lansing wanted to touch the issue. The Michigan Medical Marijuana Initiative was approved almost a decade ago – in November of 2008 – by a margin of 62.7 percent of voters. Proposal 1, as it was called, decriminalized the use of medical marijuana by chronically ill individuals who have obtained a doctor’s approval.

“It was then left to local municipalities to deal with,” he says. “From a zoning perspective, they said, ‘Here are the keys, you can regulate it as you so choose.’”

City Councilwoman Monica Galloway, who also attended the meeting, points out the Michigan State Police are getting a tremendous amount of funding, as is the county sheriff, but the Flint Police department are only receiving limited funds. They can, however, choose to utilize the funds in any manner they like.

“The reality is that the crime rate is still high in the City of Flint. Was there a provision, if public safety deteriorates more, that could give our citizens the allowance to pull back some of those licenses?” she asks. “Forecasting is everything. If we say yes, but find a year later that this is harmful to the community, does the city have the ability to opt out?”

Trooper Steve Kramer, of the state police, points out that the state has always had a tobacco task force that monitors party and liquor stores but now “the renewed funding has turned those task forces into tobacco and marijuana task forces.

“Each of the provisioning facilities still has to be licensed, and licensing fees can be quite high. It is now a state law to regulate all of this, and the monies are pouring into enforcement,” he says.

Schronce said just to open a provisioning center, a business owner must have $250,000 proven assets and that 75 percent of it has to be liquid.

Regular checks are made on any facility to ensure its business is on the up and up, Kramer says, stressing that kind of financial commitment prevents just anybody from opening a shop.

Dennis Cannon, from the University Park Neighborhood Association, says they have industrial property right behind their gates and worry about a center opening up there.

Schronce says his department spends a significant amount of time on this concern and gets 20-30 calls a week from people with the same worry. One of the requirements is a facility must be at least 300 feet from the nearest parcel and at least 500 feet away from a park, he says.

Cannon still has concerns. “If it’s a money maker, it may be good, but as individuals and families, it may be bad for us,” he says.

“It’s not a prescription that you get necessarily but does come from a medical professional,” says Kramer. “There needs to be a doctor-patient relationship. A card is then issued that determines what one is allowed to have on your person or not. Regulation is strong and cards do need to be renewed on a regular basis.”

Once it is introduced to the subcommittee, it has to go in front of the board for a series of readings through the month of April.

The FNU meeting also covered a few other issues:

“Kids in the past have not wanted to leave!” says Trooper Kramer.