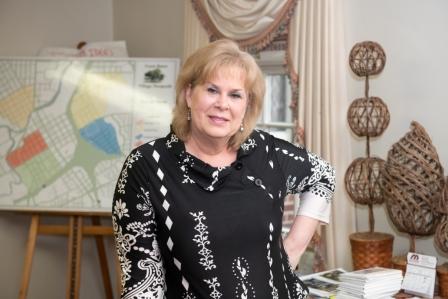 They wondered if it was God’s will.

Court Street United Methodist Church planned to build a new parish about a mile farther on Court at Lapeer Road near downtown Flint. But some members questioned whether the congregation could use its funds for greater good.

Doris Sain was among them.

“One of my Mom’s famous quotes was, ‘We can do better than that,’” says Sain’s daughter Norma.

After reconsideration and discussion the congregation decided rather than giving itself a new church home, a Christian gesture would be creating homes in the community. The decision made about 30 years ago led to 300 units of affordable senior and family homes in Fairfield Village and helped spark an ongoing mission to improve two Flint communities.

The dedication of Doris Sain and others evolved into Court Street Village Non-Profit Housing Corp., one of the city’s pioneers in neighborhood improvement strategy.

Now 82, Doris Sain didn’t just talk about how her church could do better. She traveled to Washington, D.C., to learn about legislation and housing development policies. She took her crusade even farther, soliciting financial support from major companies including Pepperidge Farms, Campbell’s Soup, J.P. Morgan Chase Bank, and Sherwin Williams. That move generated about $20 million.

Her efforts gave birth to Court Street Village East, which Norma Sain says was the first complex in Michigan financed with low-income housing credits. The senior building opened in 1990, followed by Court Street Village West senior apartments in 1993 and Avon Park, a mixed-income family complex, in 1995.

In 2007 Norma Sain joined the Court Street Village team. Having owned an RV dealership and understanding sales, she studied the nonprofit’s finances and advised leadership that property-focused projects were no longer the best use of funds.

“I said, ‘Why are we doing these programs?’” she says.

About the same time, Sain did “a lot of contemplating” as she noticed one of Flint’s oldest neighborhoods, Central Park, where Court Street Village had located its headquarters, starting to deteriorate.

Norma Sain launched a plan to give the organization a new direction, focused on revitalizing structures and streets. She wrote the Neighborhood Investment for Community Enhancement (NICE) plan for Central Park in 2009 when she became executive director. NICE stressed reducing decay by addressing blight, lighting, investment, safety and security.

Central Park is predominantly a neighborhood of renters, so the investor aspect of the plan encourages responsible property management.

“It’s my contention that neighborhood conditions will be dictated by the landlords, so we have to work with them to improve the housing stock,” she says.

Cul-de-sacs created at the ends of seven streets have proven helpful in reducing vandalism, vagrancy, noise and drug traffic, all once on the rise in the neighborhood.

In 2013 McFarlan Home, a major supporter that donated the historic house that became Court Street Village’s office, collaborated with the organization to implement NICE’s lighting phase. Court Street Village installed 50 LED units with the assistance of funds from the Community Foundation of Greater Flint that were used to trim around 100-year-old trees.

Other improvements, supported with grants, include 14 newly painted houses and repairs to 38 percent of Central Park’s 186 homes. Court Street Village no longer owns its residential complexes, but the organization recently received about $150,000 from the City of Flint and McFarlan Home to offer down-payment and repair funds to potential home owners in Fairfield Village where the organization’s work began.

Norma Sain has revised neighborhood plans for both Fairfield Village and Central Park – where her mother still advises her and helps keep the office tidy.

“That’s what gives people a sense of pride, place and purpose,” she says. “They have to feel good about where they live.”