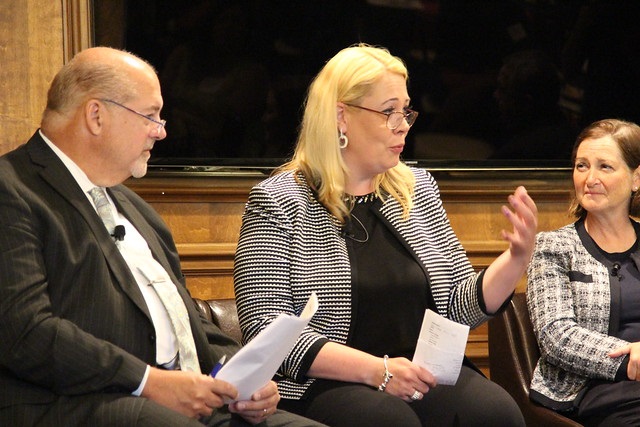 As a healthcare leader and employer of more than 33,000 employees, many would assume that Henry Ford Health System (HFHS) must actively minimize, if not eliminate, risks whenever possible.

Nevertheless, Robert G. Riney, president of healthcare operations and chief operating officer at HFHS, says eliminating the requirement that job applicants state whether they’ve been convicted of a felony made HFHS a “better organization because of it.”

The Detroit Regional Chamber and its corporate members like Bank of America agree that it’s time for returning citizens to achieve some of the same rights that are still being demanded by women, African Americans, the LGBTQ community and others. The organizations were a part of the “Investing in Futures” program at the Detroit Golf Club last week. The event included two panel discussions featuring experts from the Vera Institute of Justice and Corrections to College California aimed at sparking a larger conversation about the importance of expanding postsecondary education for incarcerated and formerly incarcerated citizens.

“Despite serving out their sentences, we label and stigmatize them when they re-enter the community,  which only serves to further exclude them from opportunities to be productive,” said McQuade, a University of Michigan law professor.

Other panelists joined the call to encourage more employers to “ban the box” on job applications.

“When we educate rather than perpetuate stereotypes about people who have served prison time we create success stories,” says Heather Gay, education director at the Michigan Department of Corrections.

Gay said she has seen a stark difference between outcomes of formerly incarcerated people who return with limited social skills, little education or skills and individuals who participate in technical training programs, post-secondary education and other support systems.

“It’s as dramatic as it is predictable,” said Gay.

“Small things like having access to transportation for job training or school can make the difference between failure and success,” she said.

Gay cited the success of a returning citizen who used the transportation assistance he received to attend truck-driving school toward a career that now earns him more than $100,000 a year.

“That man is not going back to prison,” Gay said.

Panelist Frank Venegas, chairman and CEO of the Ideal Group has hired gang members, many formerly incarcerated, at his Southwest Detroit plant.

“The abbreviated version,” said Venegas, “is that I learned that even gang members would rather have the opportunity to work a job with a living wage than receive a ‘protection premium’ to prevent vandalism against my property, theft and threats against my employees.”

“There’s a secret to our success,” said Venegas. “And that’s respect. We don’t call out a returning citizen’s or gang member’s history on the job floor.”

At HFHS returning citizen policies and practices were introduced gradually, only after involving employee groups in the decision-making and communication process.

“Often it’s our employees that help us to articulate the benefits of such policies and practices,” said Riney, whose LGBTQ-friendly policies are credited with increasing the system’s diverse job candidate pool.

“Violence in hospitals is increasing in concert with elevated community tension,” Riney added. “When our hiring practices are reflective of the communities we serve, we gain additional benefits of knowledge and experience of our workforce.

“Our returning citizens bring great understanding about how to address and reduce violent episodes in our institutions inherent with higher levels of household violence, substance abuse and increased societal tensions,” he said.

Employers once reluctant to hire veterans or LGBTQ candidates now proudly proclaim their commitment to these groups, panelists said. New and more progressive education and hiring practices can extend the trend to the formerly incarcerated, making Michigan’s job force more competitive, they said.

Support from institutions like Bank of America, HFHS and others reveal signs of market-driven movement.

“Bank of America’s purpose is to improve financial lives and that is for all citizens,” says Matt Elliott, Michigan market president and region executive for Bank of America. “When all of our citizens are supported with, and offered pathways to, an education and a job we all rise.”