By Jaishree Drepaul-Bruder on 05/06/2020Comments Below

Why anyone should listen to him is a no-brainer. As the CEO of the Beats x Beers music festival, the music and event producer has long been beloved and respected in the local community. While his company has a national following, Corder has always kept his heart in Flint. Many know him as the creative force behind a number of celebratory community events — most notably he brought platinum-selling rapper Wale to the Capitol Theatre.

The counsel Corder offers during COVID-19 comes after his own recent soul-searching. “It was hard to digest at first. We’ve never seen anything like this so I was kind of in disbelief,” he says. “Initially, I didn’t think it would last this long. Once I started cancelling more and more events I started to wonder if we would ever be able to return back to normal.”

Before social distancing was mandated, Corder and his team had the whole entire year planned. They were entering into their sixth year of the Beats x Beers Festival. The event has taken place annually during the SXSW festival and draws in a whopping 20,000 RSVPs. Additionally, they had several larger events planned (for Flint and elsewhere) that have been cancelled or postponed.

“At first I felt as if my world was crashing. This year we had so many big plans and it was set to be our biggest year yet. My girlfriend looked at me sitting on the couch and said she had never seen me look so depressed,” Corder reveals.

“But, after a while, my mind started turning and getting creative,” he says. “That is the real me. I am so passionate that I might go down for a second, but nothing can hold me down.”

At Home Series created to connect and uplift

Corder describes what unfolded next as a flow of creativity. He woke up one morning and just knew that he had to keep sharing his gifts with the world and that he and his team had to push through the darkness. 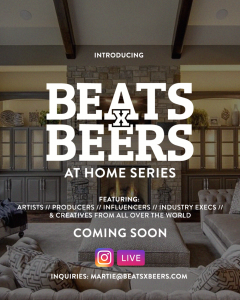 It didn’t take them long to channel their efforts into creating the one Beats x Beers At Home Series. Held on their IG Live platform, the series features discussions with all types of artists, producers, creatives and industry executives from all over the world.

“We felt it was necessary to creatively use our resources. Since we can’t curate things physically we wanted to figure out a way to give quality experiences digitally,” Corder says. “We are featuring unique people that we have worked with in the past or plan to collaborate with in the future.”

While the range of guests will vary, there are a few constants that can be counted on. Those featured will be people that have had interesting journeys and listeners can actually learn tangible things from them. Most importantly, every session is curated to uplift the mindsets of viewers.

“The end goal is to inspire our audience during these times. We are checking in with some great minds to see how they are dealing these times and then hopefully they may inspire someone else,” Corder says.

Last week about 500 people tuned into the first At Home session, which featured California-based rap duo Audio Push. What was supposed to be a 30-minute conversation morphed into two hours.

“It just organically and naturally continued past what we expected. The people loved every minute of it and I felt they were inspired,” Corder says.

Corder himself finished the session feeling lighter and more hopeful than ever before. He had been a longtime fan of Audio Push before working with them and has followed their trials and tribulations.

“I watched them go up and down, and sign to a major label, to being independent. So the biggest thing I had on my mind was finding out what kept them going the whole time,” Corder says. “I learned that like me, their journey has been fueled by their passion.”

He adds that the message he left with was that when a person has a genuine, deep-seated love for whatever it is that they do, they must keep pushing on regardless of adverse circumstances.

“The conversation touched me, because I have done the same on my own journey. As a producer, I have faced so many obstacles,” Corder says. “I have heard ‘no’ so many times and thought things would go a certain way and they didn’t. Giving up never solved my problems, but when I kept going things always worked out for me.”

Coming up in the next few weeks Beats x Beers has some impressive guests lined up. Dish Nation’s HeadKrack, BET music programmer Trenton Pratt, and Rachel Jackson (a member of YouTube Artist Relations) are just some of the personalities on deck.

Corder encourages people to follow the company on social media to find out when the sessions will take place, because currently the events don’t have a regular set time.

“We aren’t sticking to a predetermined schedule so that we can work with our guests’ availability and have more options. This flexibility will allow us to have more people on board and we can serve our fans better,” he says.

Looking forward to the future, Corder says his team’s foremost desire is to inspire people to continue to be creative for however long social distancing is mandated. Eventually, Beats x Beers will start to implement some smaller events before diving back into their larger offerings.

“These times are challenging, but this is what entrepreneurship is about. It’s about being able to withstand these times and strategize,” he says. Speaking to his own experiences, he adds: “I guarantee this won’t be the last or biggest obstacle you’ll face on your journey. These times turn the good people into great people.”