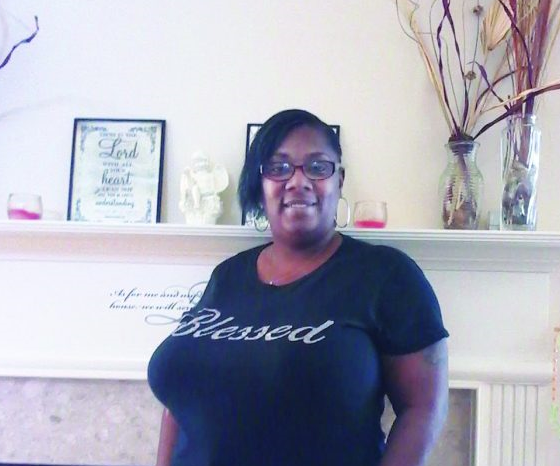 The play on words is fitting.

Kinita’s Kreations is the brainchild of Kinita Nelson, entrepreneur, wife, mother, and regular Flint citizen, who just happens to have a whole lot of ideas up her sleeve.

Nelson and her husband started the company 10 years ago, at first making t-shirts.

“It was just something we wanted to do,” she says.

They slowed production after three years, given problems that plague many new companies, like profitability and having product meet demand.

But in 2012 one of their customers came to Nelson and put in a large order. As often happens, other clients saw the t-shirts and more business trickled in.

Nelson’s husband had gone back to work as a quality technician at ACI Plastics, and Kinita had also resumed her day job at Diplomat Pharmacy where she worked as a patient care coordinator. She continued to work the next five years while the business grew.

After she lost her job in July 2017 Nelson got behind Kinita’s Kreations full force.

“I haven’t really been daunted,” she says.

Nelson’s husband, a minister, prayed on it – hard.

“We just said, ‘Lord, I need my business to grow, need to be put in a position to run it,’” she recalls.

Things have been going well ever since.

“My former job was, in a lot of ways, just a job to me,” she says. “While sitting at work, I would be thinking about all the designs I could create.”

Nelson says she began the business, in large part, because of a rash of killings in the community at the time.

“People were making ‘R.I.P.’ t-shirts with the person’s name on them who had passed away. I did the same, as well as some with Christian messages, and just spread the business by word of mouth,” says Nelson.

When her husband went back to work, the couple did less manufacturing, mostly answering order requests as needed. As more and more customers continued to buy their product, they also requested other custom items, like personalized wine glasses, water bottles, and novelty party favors.

Nelson took a “Why not?” approach to it all, and they expanded, making the personalized items and others that were party -and event-friendly. Invitations, coffee mugs, potato chip bags, juice box wrappers, and personalized candy bars became part of their repertoire.

They started to buy equipment from corporate and online suppliers, but the couple manufactures everything at home. The Nelsons transformed their formal dining room into an office, which holds two cutting machines, a heat press, four printers, and various computers.

The shirts and coffee mugs are made by using sublimation printing, a process by which the actual photo is embedded directly into the material. It’s fairly foolproof, and the image doesn’t fade or wash away easily. Glass etching, glitter, and vinyl are used to create the other products. Kinita’s Kreations also fashions custom t-shirts with vinyl, and photographs, rhinestones, or any item that will make the design stand out.

But Nelson hasn’t always been crafty.

“No!” she exclaims. “I can sew, but that’s about it. My mother and grandmother used to sew and just watching them helped me to learn, too.”

She went to school for business administration and had always had a good nose for the commercial market, but didn’t move forward in starting her own endeavor until recently.

“I finally just realized that this is what I needed to do,” she says.

“They love it,” Nelson says. “D’Nita comes up with designs for items to sell to her friends. D’Nitra likes sewing, likes to make dolls and accessories.”

Nelson joined a crafting group to expand her repertoire. She’d post images of items she learned to make on her Facebook page, and if enough people liked them, she would develop a product line.

Nelson’s Instagram page, “Kinitaskreations,” is the starting point for processing many orders. She doesn’t distribute in stores, but has plans to do so.

She will ship anywhere and fill orders for a wide variety of items and gifts.

Crafty she might not be, but wise and winning, she is.

A Crafty Kreation: Family-owned shop fills a niche by supplying gift needs added by Cindi Cook on 07/23/2018
View all posts by Cindi Cook →